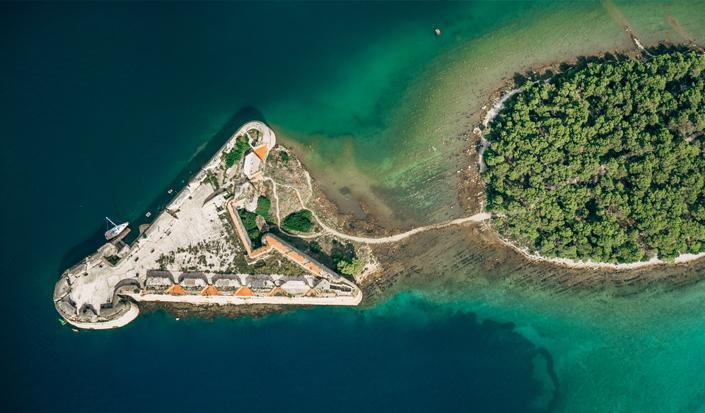 Every sailor cherishes being on a yacht, gliding on the waves with a fair wind in the sails and the compass pointed towards new and interesting destinations. I have always been a child of the sea and simply love that feeling of freedom, my eyes on faraway horizons and the taste of salt on my lips. What I also have a passion for is discovering places that speak of history and ancient cultures. While sailing the multi-faceted Croatian coastline, where the river Krka flows into the Adriatic Sea, my friends and I came across a beautiful city with a rich cultural heritage and fascinating places to traverse. 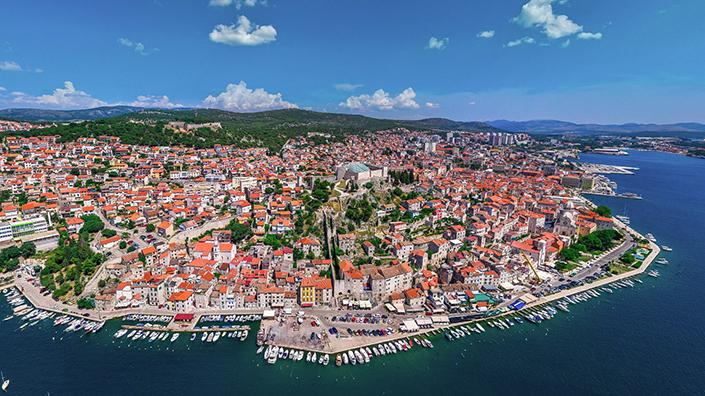 Šibenik - one of the biggest cities in Dalmatia and the oldest on the Adriatic coast. Founded by Croatians, unlike many other cities in the country that were established  by Illyrians, Venetians and so on, it was birthed in St. Michael’s fort on top of a hill, settling down at its foot until it ultimately sprawled outwards. Named in 1066 by the Croatian King, Petar Krešimir IV, it is still sometimes referred to as Krešimir’s town. It’s not certain if its name originated from the palisade of sticks (“šibe” Croatian) or from the forest (“Sibinicum” Latin) that surrounded it in its early days.

Croatia has several natural and cultural jewels that are under the protection of UNESCO - the almost 50 year old organisation that has done remarkable work globally preserving cultural and natural treasures for future generations’ appreciation. However, Šibenik is the only Croatian city, and indeed one of few in the world, that can proudly boast of the fact that it has two UNESCO monuments: The Cathedral of St. James (registered in 2000) and the St. Nicholas Fortress (registered in 2017).

We sailed in from the Šibenik archipelago past the imposing St. Nicholas Fortress that guards the entrance into the long St. Anthony’s channel, on a hot mid-summer’s morning and, enjoying the scenery we slowly made our way to the glam D-Marin Mandalina Marina tucked into channel's furthermost corner. The marina is well-protected by the peninsula from bura winds and from yugo or south winds by a floating, concrete breakwater. 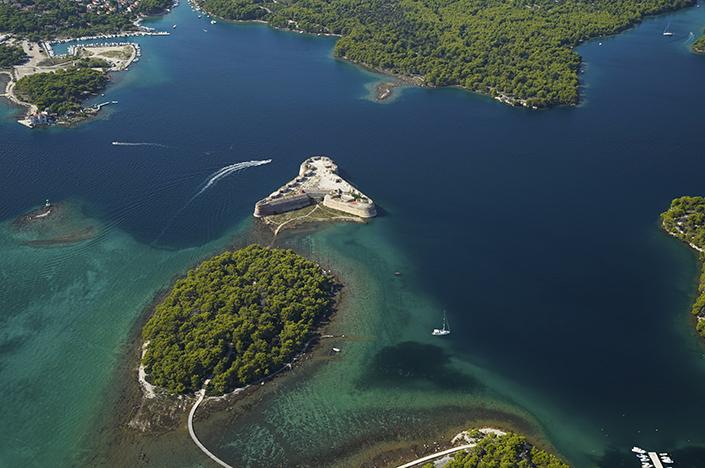 We berthed at the marina, which is a world-within-a-world being fully-equipped with all the necessary facilities a sailor could wish for - from electricity and water connections, boating repair and washing platform, ablution blocks and even a restaurant, supermarket and exchange office. It can accommodate catamarans and boats as long as 140m and it has a capacity of almost 500 berths. Judging by the rows of neat masts undulating in the breeze, as busy as it seemed, there was still a bit of space available. Once we had settled in, my friends, who are as much culture-junkies as I am, decided that the first priority of the day was to check out the UNESCO monuments. We got info and a number for the Taxi boats from the reception office and called them to arrange a ride to town a little later.

After a satisfying brunch, we jumped on the taxi boat, which docks close to the boating fuel pump, and cruised towards Šibenik, admiring the sights of this graceful city: St. Michael’s fort with double rampart leading down to the waterfront; magnificent ancient buildings and churches well-preserved in the old quarter, fused eclectically with the new surrounding it; new and old harbours; fortresses of St. John’s and Barone; modern high-rise buildings and residential suburbs climbing the backdrop of white rocky hills peppered with vegetation. 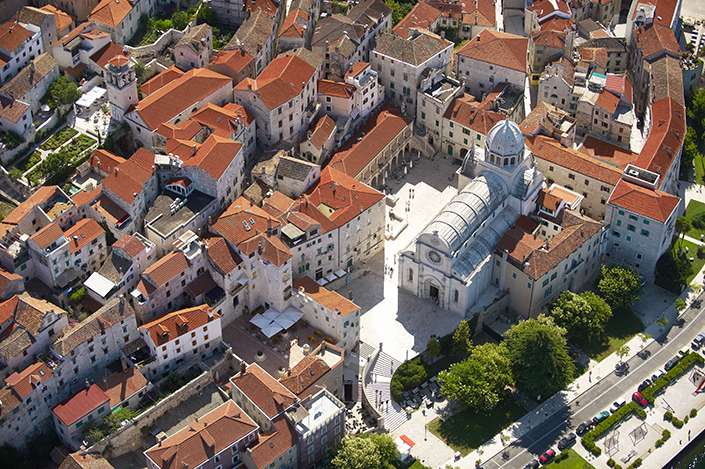 We disembarked at the dock of the old town centre. There is so much to see here, but we were on a mission so we strolled towards the cathedral – a short walk away. As we approached the Square of the Republic of Croatia (previously “Plathea Comunis”), the cathedral stood out prominently amongst accompanying stately buildings. One is the City Hall (ex-Civic Loggia), which was built in a Renaissance style and, although completely destroyed by bombs in the Second World War, was successfully restored. Another is the Prince’s Palace, which has evolved from housing the city government during the Venetian rule to becoming the Šibenik City Museum. Between the cathedral and the Bishop’s Palace built in a Gothic/Renaissance style, is an ancient city gate, now called The New Gate, which was restored to its current shape in 1570. When I cast my imagination back into the veils of time, I can imagine this square as  the bustling business and social centre of this flourishing town. 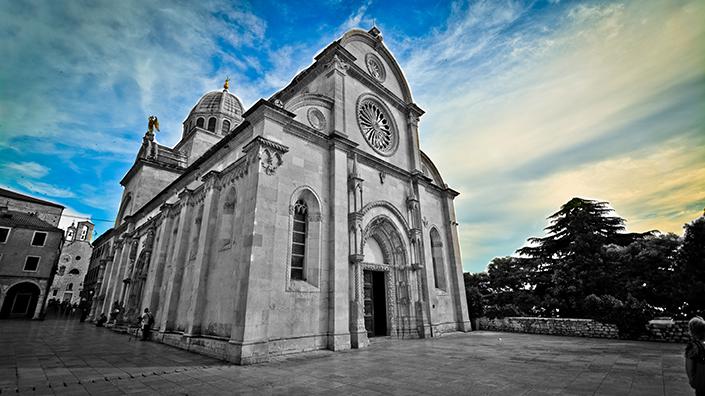 The Catholic Cathedral of St. James, dedicated to St. James the Greater,  known locally as “Katedrala Sv. Jakova”, is the most significant Renaissance monument in Croatia. It took over a century to build and has graced the square for five centuries. Can you imagine how many master builders and stone masons spent their lives working on it? I find it fascinating that they constructed such durable masterpieces of architecture so long ago. Where cathedrals at the time were usually built using a combination of wood and stone, what makes the Cathedral of St. James unique is that it was the first cathedral to be built purely in stone. The architects responsible for this innovation, Francesco di Giacomo, Juraj Dalmatinac and Niccolò di Giovanni Fiorentino (Nikola Firentinac), will be forever remembered in the halls of time. They used a new technique, previously used for woodwork, whereby huge stone blocks were fitted into a load-bearing stone framework without using any mortar or binding composites.

The cathedral was built on the site of the original Romanesque cathedral and completely transformed. Construction commenced in Gothic style in 1431 and was completed in 1536 in the Renaissance style. Visualise the sheer effort it took, particularly as rocks of limestone and marble were brought from the distant islands of Brač, Rab and Korčula and then cut and loaded using lifts, ropes and pulleys and much manpower.

The cathedral doesn’t have a bell tower and the dome, which is 32 m high, had to be restored to its former glory after it was badly damaged during the Croatian War of Independence in September 1991 when it was bombarded by Yugoslav and Serbian armed forces.

The statue in front of the main entrance immortalises the life of Juraj Dalmatinac who died in 1475 and never saw the completion of his life’s work. He was also responsible for the awe-inspiring frieze of 71 heads sculpted around the cathedral, which capture and evince the character of the people whose faces they replicated. It has never been established whose heads they were, but it is thought they were of prominent local citizens of the time. High up on the roof, the patron saint of Šibenik, St. Nicholas, and two others gaze down upon the town. Two lion sculptures guard the side portal, known as the Lion Gate, with intricate sculptures of Adam and Eve on columns above them. Coat of arms, cherubs, the first Renaissance lacework sculpting in Croatia and more - the art and detail that went into the stonework all around is commendable… And that’s just the outside! 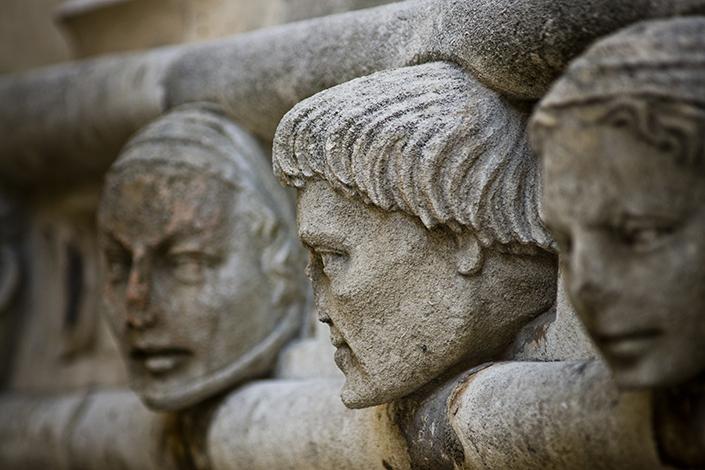 Inside the vast airy coolness of the cathedral there is much to discover: three naves and apses; tall columns – four supporting the cupola; dedications to bishops – sarcophagi and two graves; statue of St. Elijah; wonderful paintings; famous altar of the Holy Cross and others; beautiful reliefs of angels, exquisite gold ornamentation, the treasury, marble creations and colourful round mosaic window.

Nikola Firentinac died in 1505 and his son, Jacob, with other builders went on to complete the cathedral according to his instructions. Completed in 1536, it was finally consecrated in 1555. Since then it has undergone some restoration work a couple of times.

Time flew by as we surveyed the ambience of a time long gone. We headed back out to the shore front and about 100m along to the pier called Krka, boarding the wooden boat to transport us to St. Nicholas Fortress. We sailed along the St. Anthony’s Channel, fringed by green vegetation through which on the port side, a 4,5 km promenade was built to blend into its natural surrounding. It meanders all along the seashore to the islet of Školjić and is a favourite for walks, sightseeing, jogging and cycling.

Along the way through tour guides and multi-media we learnt about Šibenik and its surrounds and of interesting nooks and crannies the promenade offers: St. Anthony’s cave where hermits used to reside with a little chapel its heart, an undersea tunnel called "Hitler's Eye" dug by the German army during the 2nd World War and two entrances which were used for military and torpedo boats; an elevated lookout along the promenade with panoramic telescopes; pier; rest area; outdoor urban gym and kids playground area; swimming coves such as Minerska where there were secret military barracks and facilities built by the former Yugoslav People’s Army.

One can walk along the promenade and over a wooden bridge specially built to allow the sea to flow under it, to the island of Školjić. There is no access to the fort unless you join the excursion as we had done and boats are not permitted.

St. Nicholas fort was designed and built by Giangirolamo Sanmicheli from 1540 to 1547, but not quite completed, on the isle of Ljuljevac - the site previously of a St. Benedictine monastery of the same name. It is one of six Venetian fortresses that were built in a 1000 km line stretching from Lombardy to Montenegro. 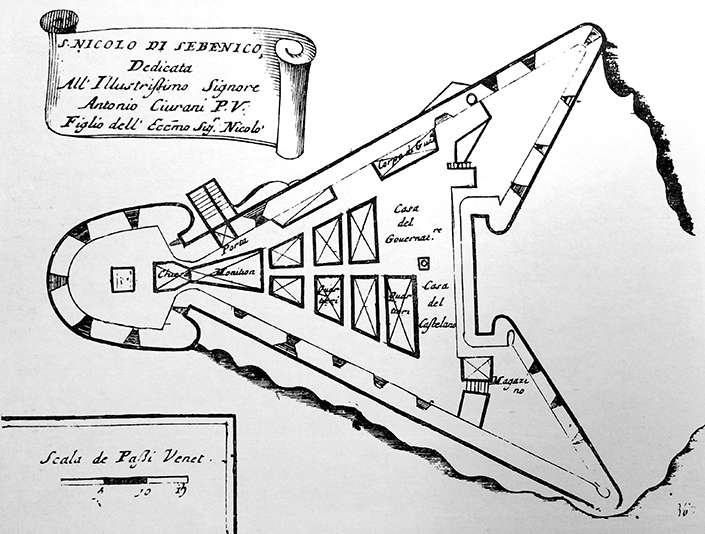 Built in a triangular shape with buttresses on the three corners, the northern buttress defending the mouth of the channel being of a rounded semi-circular shape, the fort was completely surrounded by sea until a pebble path was built joining it to Školjić. The foundations were constructed in stone and the upper level of brick as that was judged to be stronger and a more stalwart defence against cannons. Although built as a lookout to monitor the sea routes and an important stronghold to protect Šibenik against the Turks, it never had to test its worth as was never attacked from the sea. The locals like to think that its appearance, as beautifully impressive as intimidating, was a bigger threat than the 32 cannons it housed, and deterred their enemies from attacking.

Upon the dawning of the 20th Century, the fortress was abandoned by the Austro-Hungarian army and only the crew controlling the passage of boats through the narrow St. Anthony’s Channel remained. 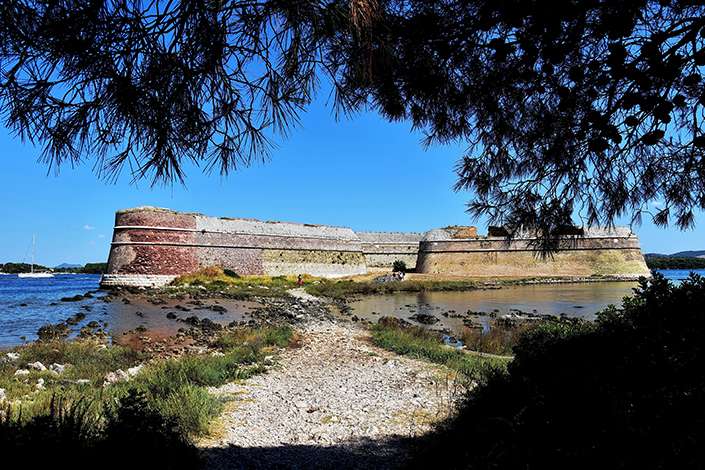 We disembarked and entered the fort through the eastern doorway, which bears the only adornments to this otherwise austere fortification. Centred above the doorway is a now headless statue of St. Nicholas and on the inside, four sculpted coats-of-arms of Venetian doges and a recess which once displayed a lion.

Descending down stairs to sea level we entered a wide open space with a domed, alcoved ceiling whose only light streamed in through the cannon ports. Then up a rounded ramp to the terrace, which was enclosed to garrison army troops until its reconstruction in the 19th century. Only gun ports and ramparts from that era remain. From here 360 degree views of this panoramic coastal area and the magnificent city of Šibenik were enjoyed.

After our wonderful exploratory day we could well understand why the locals here love their city, are so proud of their rich cultural heritage and are always delighted to share it with visitors with open arms  exclaiming “Dobro došli - Welcome!”

Author: Diana Karmela
Photos by Šibenik Tourist board and Wikipedia 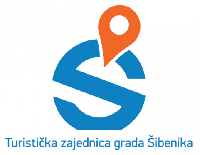 You have written such an article in such a good way that after reading it, I am doing that once I am definitely there.
Showing 1 to 1 of 1 (1 Pages)