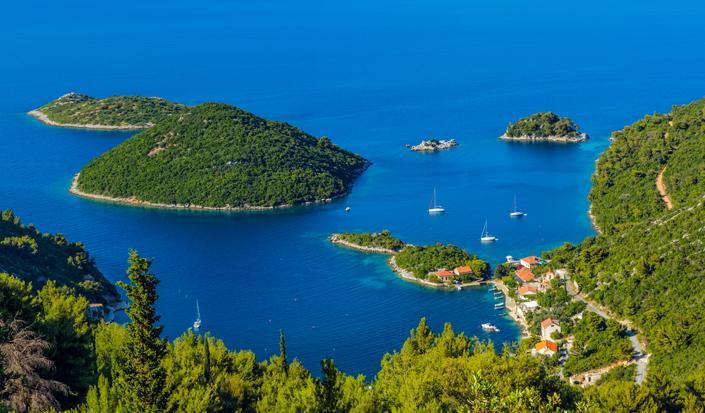 Struggling to reef in the mainsail in the blustery wind, we could see the small port of Pomena in the distance, cheerful red Karlovačko umbrellas lining the port. And an ice-cold Karlovačko was just what we needed after a morning of bracing sailing on the Mljet channel between the Peljesac peninsula and Mljet Island. Here we were at last at Mljet Island, the highlight of our cruise. As soon as the boat was moored safely, Matt and I left the rest of the crew to order the beers and went in search of the local Diving Centre. We wanted to dive the famous inland lakes, home to the largest coral reef in the Mediterranean.

Not truly lakes, but an unusual bay linked to the open sea by the narrow Soline Channel, the Veliko Jezero (Big Lake) covers an area of 1.45 km squared and is 49m deep; Malo Jezero (Small Lake) is 0.24 km squared and 29m deep. Strong tides and currents allow the sea to enter and exit the lakes through this channel creating a unique reef with abundant marine life including an endemic species of jellyfish and the Adriatic’s largest bivalve – the Noble Pen Shell.

The northern part of the verdant island of Mljet was declared a national park as far back as 1960. The park authority’s presence is palpable, the staff whizzing around in electric cars, the fees that each visitor must pay to visit it and the feeling of wildness in the well-preserved forests where no building is allowed. Ancient Greeks called the island "Melita" or “Honey” which over the centuries evolved to become the Slavic name, Mljet. Legend has it that this could have been the island where Odysseus was rescued and then honey-trapped by the sea nymph Calypso and kept as her lover for 7 years. Easy to believe on this lush and seductive isle. 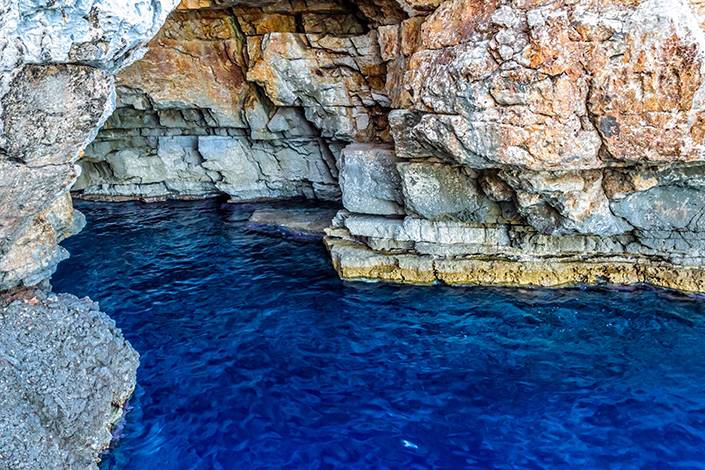 At the dive shop, the local dive master Ivan informs us that we are too late for the days diving and we’ll have to try again tomorrow. We decide to join the rest of the crew and explore the park’s inland lakes by boat and from the surface, instead.

We pay or dues at the National Park office and make our way to the dock where the boat leaves for the southern part of the big lake, Veliko Jezero and the tiny island of St Mary where there is an old Benedictine monastery. Surrounded by the dense forests, the little boat made its way to the tiny island in the corner of the great lake and let us off just under the monastery. The kids were dying to leap into the water and we followed them around to the back of the monastery to explore the surrounding waters. 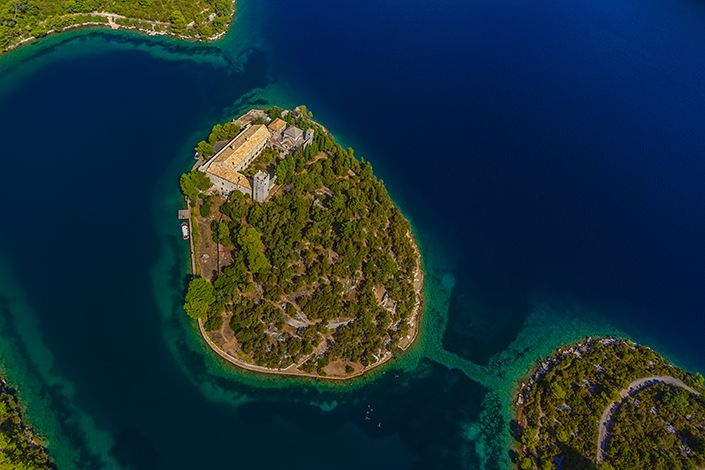 The next few hours were whiled away exploring the lake with masks, jumping of rocks and basking in the sun. Out in the middle of the warm briny water, floating on my back I felt and heard the immense power of nature, the water enveloping me in her warm and salty embrace, the intense sound of the cicadas almost covering the delighted shrieks of the children in the distance. As if from a birds eye view, I saw myself floating in the waters off an island, in a lake, on an island, in the Adriatic Sea, nature expanding ripple-like outwards with me at the centre. No wonder they built a monastery here; the place had that kind of vibration.

It was time to explore the holy site. The Benedictine monastery of St Mary’s on the tiny island of the same name was first built in the 12 century. From the 6th to the 12th century the Benedictine monks spread through Europe preaching Christianity and there are a number of these monasteries throughout Croatia.  It was rebuilt and extended a number of times through the following centuries each time reflecting the architectural practices of the epoch; from Romanesque to Baroque to Gothic to the Renaissance style of the flourishing and wealthy Dubrovnik Republic. Defense towers were built and walls enforced to fend off pirates and pillagers in the 16th century. We wondered through the old stone buildings, paid our respects at the altar of the church, under the impressive stained glass windows and continued the walk in the grounds of the monastery. We stopped a moment to enjoy the stunning views of the lakes stretching before us in the peace and quiet of this mesmerizing place.

Sundown in the Harbour

At the end of the day we found ourselves back under the red Karlovačko umbrellas absorbing the atmosphere of the port, mulling over the sights, sounds and feelings of the day, cold beers in hand. Now, if only we could find Ivan, to organize some diving for the next day before setting sail from this most magical of islands.