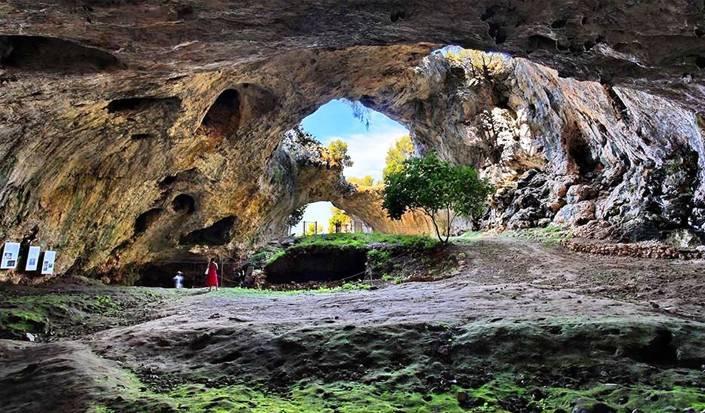 What makes sailing the Adriatic such a desirable adventure is the exquisitely calm blue sea as you meander between thousands of islands full of mysticism and folklore. Of course, every sailor knows that one eye must always be kept on the weather in case a sudden unexpected change of wind should blow up a storm.

In the heat and heart of summer in July, after a day of smooth sailing around Korčula, a popular island in southern Dalmatia, and voted as the most beautiful island in Croatia, we set sail for the small town of Vela Luka nestling on its western flank. Vela Luka means "big harbour" in Croatian and the bay is well-sheltered being a whole 9,5 km long. 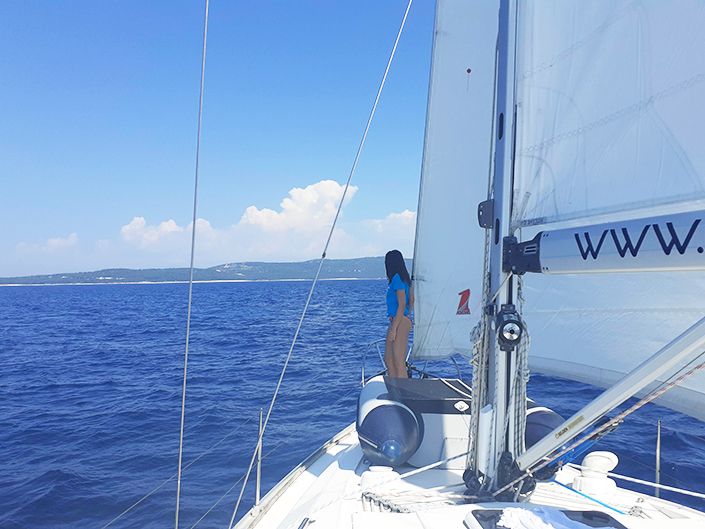 As the sun dropped toward the horizon and cast its golden path on the water, we fell into a satisfied, reflective mood. As the world quietened down, all that could be heard was the swish of our yacht cutting through the water, the seagulls above and the wind singing softly in the rigging. Tacking to port, at the entrance to the bay, we rounded the islet of Proizd renowned for its glorious beaches. We snapped out of our reverie, dropped sail and switched on the engines. As we bypassed the island of Ošjak in the centre of the bay, we gazed aft as the sea and sky reflected its glorious transformation from blues, to golds and deep oranges to lilacs. A profound and magnificent moment.

As dusk settled, we approached Korkyra Marina, which is known as the 'naturally' safest port in the Adriatic. Vela Luka has always been a safe haven for sailors and the brand new  marina, just opened in June 2020, is the gateway to this popular tourist destination with its clean seas and peaceful vibe, spiced with a feast of gastronomical and cultural delights. Not to mention internationally award-winning wines Pošip, Rukatac and Grk born from a 1,000-year-old winemaking tradition.

The marina's innovative design, built using environmentally-friendly materials, branches off the shoreline with a series of bridges extending onto a constructed island. There is a coffee shop, modern restaurant offering a fusion of traditional and modern dishes, bar, plus the graceful 4-star Hotel Korkyra with a large swimming pool and its own private beach. The marina has a fuel pump and the capacity for 135 berths and yachts over 35 m in length.

My sailor friends and I could also be called "culture vultures". What attracted us here was the quest to find the spot the locals describe as the "youngest and oldest settlement" on the island. You might be wondering how that's possible, but it's simply because Vela Luka is the youngest administrative area on Korčula and on the hill above the town there is a cave where mega old prehistoric findings have been uncovered. That's where we were headed. The cave is known as "Vela Spila" (Big Cave).

We decided to walk to Vela Spila and set out early the next morning. From the Hotel Korkya, we walked on the pavement running parallel and opposite the sea shore, admiring a portion of "The World's Longest Mosaic" underfoot. This amazing, ambitious art project is still creeping forward with individual mosaic squares created by various artists being laid down and currently runs about 300 - 400 m to the town centre. Remarkable!

At the Pod Bora restaurant, we found the signs directing us to turn right towards Vela Spila and we strolled through the town until we got onto the "Blue Road". This walkway is only 900m long and took us about 30 minutes straight up Pinski Rat hill. If you are not into walking, you could hire a bicycle, scooter or a car in town and go via a separate road that will lead you to the cave.

The walk did us good though! Great fresh air tinged with the smell of aromatic and medicinal herbs wafting past our noses and the beautiful scenery of Vela Luka and the bay below us. The view improved as we got higher and at the entrance to the cave, we stopped for a moment and took in the wondrous scenery: Vela Luka old town centre, bay and harbour below us, the hills behind them, the newer areas creeping up the hills amongst some green olive groves and beyond the harbour mouth, the islands of Ošjak and the Adriatic Sea.

Did you know that the view 20,000 years ago would have been quite different? Where the sea flows now would have been a green valley of Adriatic plains with  only a distant glimmer of sea on the horizon. A green oasis in the ice!

As we crossed the threshold into Vela Spila through the 8 m wide entrance, we looked down upon the dig area, which was now abandoned as the archaeologists had recently completed a project. By this stage only a 200 m2 area had been worked on and excavations had gone down 11 m, which is nowhere near the bottom of what is still to be uncovered. The cave floor would have been far lower, but sediment deposits over the millenia have added at least 10 m height to its surface.

The limestone walls form an elliptical shape some 40 m long and 40 m wide and reach up 17 m high with the cavernous roof stretching out overhead. The light shone brightly through two large openings known as ""Velo Ždrilo" and "Malo Ždrilo" created by a natural fall in. The cave is 1100 m2 big and, not only has natural heritage value, but is also an important protected cultural asset. 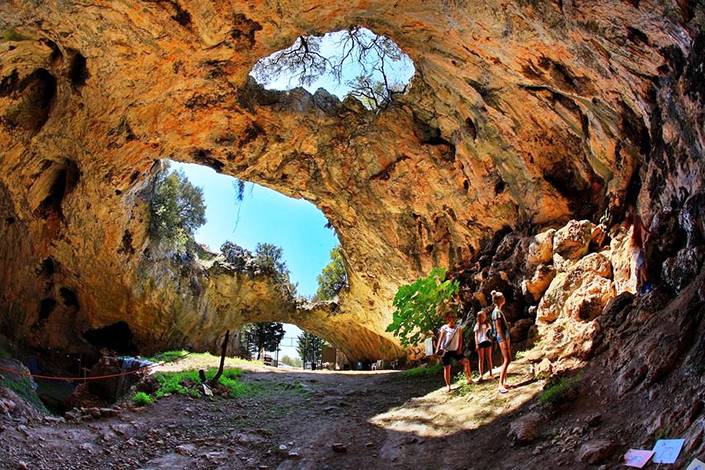 It was fascinating to realise that every step we took downwards along the incline into the cave's depths was a step backwards in time. Each layer of residue holds a key and insights to prehistoric life. From the most recent, the Iron and Bronze Ages, down to the New Stone Age (Neolithic - from about 4,500 BC), Middle Stone Age (Mesolithic about 15,000 to 5,000 years before present time) way down to the Old Stone Age (Paleolithic - a whopping 3 million years ago). And that's as far down as the present excavations have been dug. That's a long, long time span! 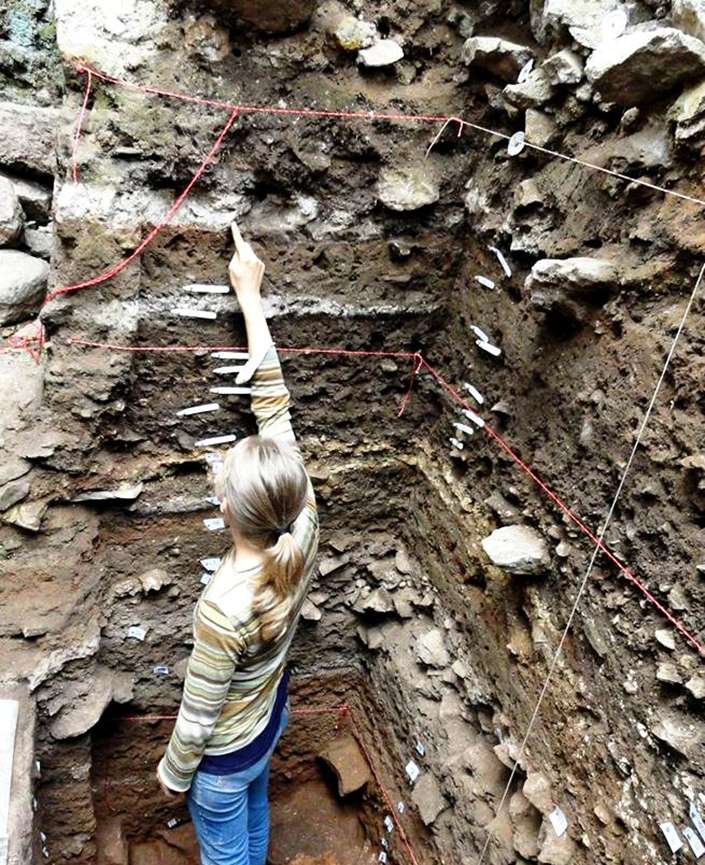 How did we learn all this? Ironically by using our ultra-modern technology through a  mobile app linked to a QR code found on the entrance boards. This provided us with a guided audio tour of Vela Spila. What a marked contrast of extreme timeframes!!

The work on Vela Spila started in 1949 with Marinko Gjivoje who initiated scientific research and in 1951, together with Boris Ilakovac and Vinko Foretic commenced with preliminary test excavations. After promising results they were given the go ahead. Grga Novak, considered one of the most prominent researchers, investigated the cave's links to the island of Hvar and his findings were published in the "Annals of the Yugoslav Academy". He initially led annual excavations from 1974 onwards and in 1978 Professor Bozidar Cecuk, a member of the Cabinet of Archaeology of JAZU (Yugoslav Academy of Science and Arts) continued the work. Dinko Radić, who currently heads the "Vela Spila Archaeological Collection" in the Cultural Centre in the town, joined in 1986 and Franko Oreb was a permanent crew member. 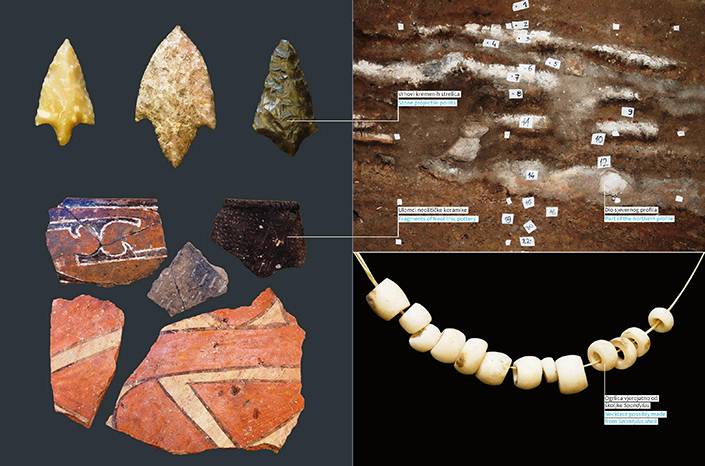 Through radiocarbon dating, they discovered that humans would occupy the cave seasonally from as early as 20,000 years BC, evidenced by tools used for hunting of deer, aurochs (prehistoric wild cattle) and gathering, mostly of marine resources. They found remains of humans, food, flints, stone, clay and bird and animal bones that leave clues to the development of mankind's spiritual and material culture. Funnily enough, no remains of clay bowls or cups were found until the New Stone Age. Also from then onwards it was apparent that the people kept their sheep and goats in the cave, possibly through the winter months. Intriguing is the fact that Vela Spila is one of only five sites in Ice Age Europe where fired clay artefacts were found. Imagine how they chanced upon the fact that heating the clay would strengthen it! 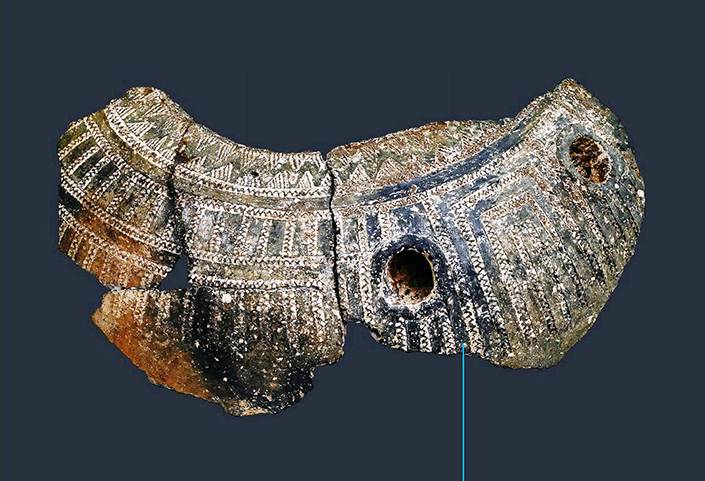 What is also interesting is the fact that, even though there were prolific types of sea shells available, the inhabitants used only one particular variety to make decorative beads, which they pierced to create jewellery, adorn clothing or thread through the hair. The same shells were also found in other Adriatic and central Balkan sites, which reveals a shared tradition amongst a widespread populace.

Around 15,000 years ago there was a cataclysmic event - an enormous volcanic eruption in the bay of Naples called the Neapolitan Yellow Tuff event. A layer of ash was found by archaeologists that settled in the cave's sediment, being thick enough to signify that a vast amount descended over the area. The big, black, clouds that obscured the sun and rained toxic ash down must have been terrifying for the people and it is evident that the cave was abandoned, and probably the area, for thousands of years thereafter.

It was sometime post volcano that the sea levels rose and Korčula became an island with weather conditions similar to those today. Between 1986 to 1998, three children's burial sites were discovered in the newer Middle Stone Age  layers. Also found were the graves of two people who were called "Baba and Dida" (Grandma and Grandpa) and became quite famous. Later, even though it was established that they were actually two women, the names remained. 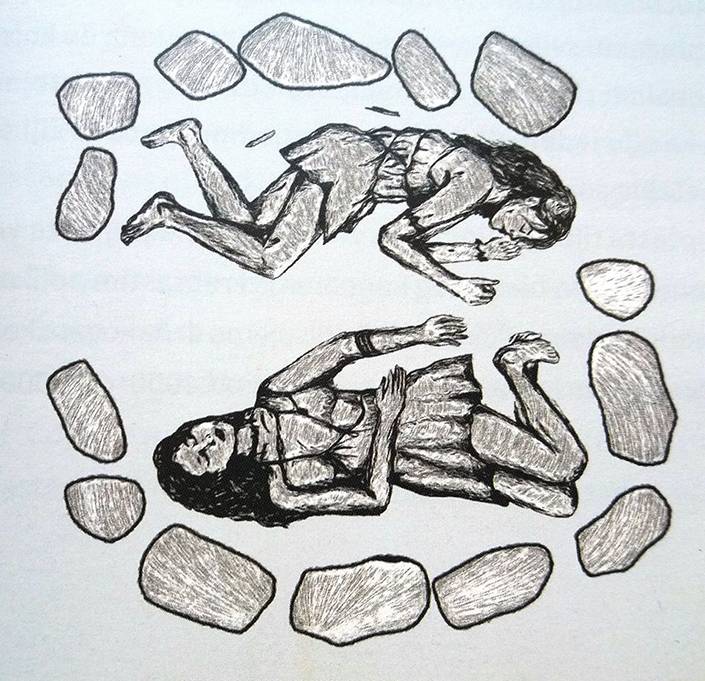 In 2004 "Stanko", the oldest Mediterranean skeleton from over 9,000 years ago was also discovered. Do you want to know why he was given the name "Stanko"? Well, two archaeologists were busy on the dig and one spotted something that could have been a part of a skeleton where his colleague was about to strike, so he shouted, "Stani!" (meaning "Stop"!) to prevent his colleague from damaging it. Lo and behold it was a skeleton that became known ever after as "Stanko". 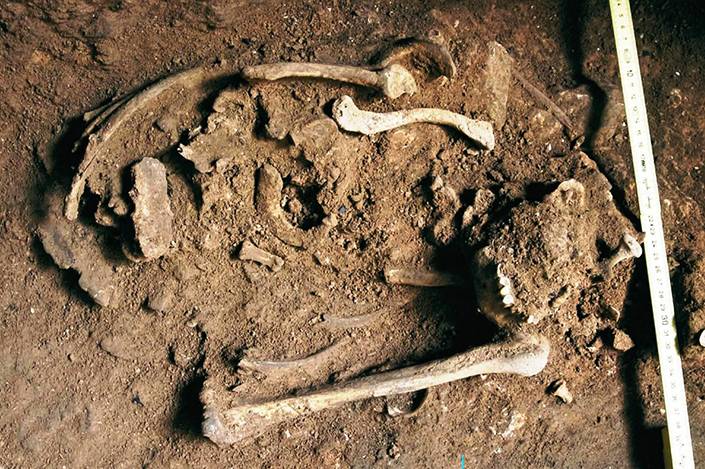 Before leaving, we sat quietly imagining life as the cave dwellers had experienced it eons ago. Local legend tells of a huntsman in the Ice Age who went out to find food for his starving family and came across a roe. A beautiful blonde girl magically appeared and pleaded with him not to kill the roe. Ignoring her, he chased and speared the roe and, as it fell, it turned into the blond nymph. She was in fact the daughter of the Creator and the protector of animals and nature. Her grief struck father placed her image as the roe in the stars, as well as that of the huntsman who eternally chases her. In his anger the Creator flooded the valley and hence, what is now known as Vela Luka, was formed. The stars remain as a constant reminder of a bygone peaceful time.

Of course, on our way back, we had to pop into the Centre for Culture in town. It's located in an historic, old school building next to St. Joseph's church. The entrance atrium is beautifully decorated with mosaics created in 1968 when Vela Luka hosted the International Artists Meeting. In the museum, apart from other exhibits, the ceramic fragments, animal bones, tools, shells and some reconstructed artefacts from Vela Spila live on. Here also of great interest, the large amphora which was found containing baby bones and seven prehistoric knives.

And so ended our journey sailing through epochs of time conjured up by the transcendent Vela Spila. 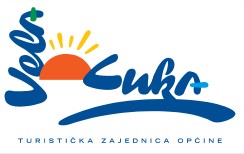