The Punat marina on the island of Krk is very well equipped and the centre of several yacht charter bases. It is perfectly connected to the bridge and the highway to the inland. Likewise Krk Airport is only 40 km away.

Usually, especially because of the summer crowds and heat, the first thought is to sail away as soon as possible! Of course, as soon as you set off and the wind starts to stream across the deck, your face, your hair … the feeling of heat is reduced by half!

But hold on a little longer, just enough to thoroughly inspect the boat, enquire of the charter staff about the condition of the boat, any potential problems you could expect, local weather forecasts, etc. They know it best and are most often willing to help and explain. Fill your boat with provisions for at least two days and get going!

Assuming you have checked the weather forecast and no bura winds have been reported, Grgur Island, once a prison, with its sheltered bay, turquoise colour of the sea, scents of pine trees and Mediterranean herbs, is a great place to spend your first night! Don't be afraid of the sounds of movement on the shore. In fact, the island is full of wild deer, which often go down to the shoreline at dusk.

Rab and its four bell towers!


The city of Rab

Of course, before Rab, you will stop to take a swim in one of the beautiful bays that the island abounds in. There’s no need to especially single out any one because they are all ... special! Nevertheless, my favourite is the Sveta Mara, probably because it has given me shelter from strong bura winds several times.

Because of its history, architecture, gastronomy and various events, Rab is a favourite destination for yachtsmen. Take a stroll through the old town and the central street. Wait for the sunset on the upper street, peek into one of the gardens, climb the walls, the bell tower and still so much more!

Taste the Rapska Torta (Rab cake), sit next to the fountain that tells the legends of the island's origin, inquire about Marin, the stonemason, deacon and founder of the Republic of San Marino. Close your eyes and go back to the Middle Ages, and when you open them, if you find yourself surrounded by knights and crossbowmen, if you are startled by a cannon shot, no, it’s not a dream. You just found yourself in Rab during the "Rab Fjera"!

Craftsmen, blacksmiths, millers, court jesters and dancers, a crossbow tournament, fanfare, drums ... The whole old town has returned to the Middle Ages and you, as a time traveller, are part of it!

Then, the Corners of Rab! A unique event where, with the music of local musicians, you can discover hidden places, gardens of churches, villas ... 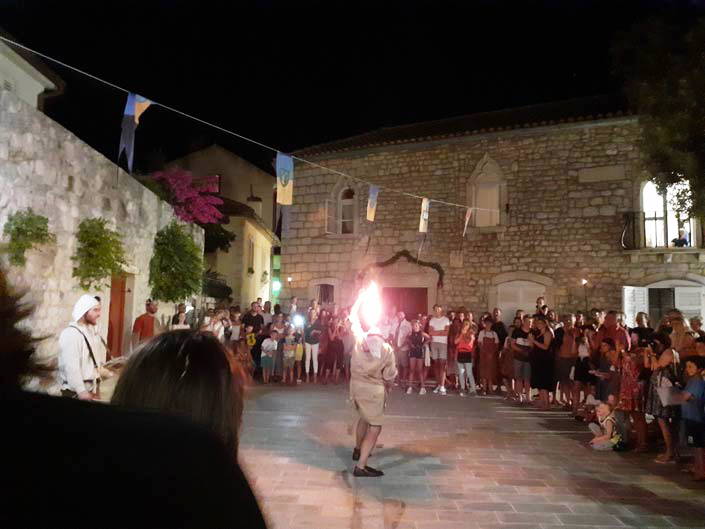 We sailed from Rab to Ilovik, a famous port with mounted buoys and very safe anchorage in the channel between the islands of Ilovik and St. Petar. Nothing nicer than being securely tied under the Venetian fortress, Fortic on the island of St. Petar to welcome the sunset.

Likewise for sandy beach lovers, on the south side of the island of Ilovik is Pržina bay. Only when sailing in, be aware of the draught of your vessel. The bay is shallow and there is a reef between Parknu Bay and Pržina Bay.

When it comes to sand lovers, just 10 miles west of Ilovilk is Susak Island - a geological phenomenon. The island is entirely sandy with three large sandy coves, but for me the favourite is still Porat Bay on the west side of the island.

Probably because it's completely wild, carved deep into the sand and so isolated that it doesn't even have an internet network. Ideally, do you want to hang out with your teenagers at last?! Also, the island is mostly covered with vines from which wines are produced (Illyria, Liburnia) obtained from the autochthonous grape variety Trojiščina.

If you decide to spend the night there, which is often the case, be sure to visit the town as well. Climb to the upper village, peek into the church, ask about the folk costumes - mini skirts of vibrant colors, unique costumes in the world, and walk to the lighthouse.

If you intend to go from Ilovik to Mali Losinj, be sure to sail closer to the shore and choose one of the bays - Pijeska cove, Balvanida, a mini fjord Krivica bay, Engleza bay on the islet of Koludarac at the very entrance to the Losinj bay. In the shade of century-old pines, similar, but each special in its own way. It's simple. You just stop, drop the anchor and most often you stay!

Artratore Bay, Zabodarski Beach just a mile west of the entrance to the Bay of Losinj, but definitely worth the trip, especially with the evening maestral when the full sails alone lead us there.

At the bottom of the two mile long bay is Mali Lošinj, the largest town on the Adriatic islands, with two marinas, pontoon berths by the town itself, two petrol stations, shops, markets, restaurants and everything the city already has to offer. An ideal place to fill a boat’s pantry.

If you are not lucky enough to go fishing, there is an abundant fish market in the centre. There is also a fountain, two dolphins and a sculpture of a fisherman on the square, and a little further along the promenade you will arrive in front of the Museum of Apoxyomenos. Safeguarded there is one of the nine world-famous, but most well preserved ancient bronze statues of an athlete, which was only found in the late nineties near the islet of Vela Oruja in the Losinj archipelago.

Half a mile from the town port, on the northern side of the bay, between the two marinas, you will come across the Privlaka passage - 8 meters wide and 2.4 meters deep. It opens every day at 9am and 6pm, except when there are heavy bura winds. Priority is given to boats that are exiting the port. Pay attention to the currents in the canal, i.e. do not go immediately behind the boat in front of you, but leave a space and bring speed into the canal. Braking, going astern in the channel is a bad decision!

Two miles southeast, you will arrive at Veli Losinj. Be sure to visit it and now is the perfect time. The boats that overnighted are leaving, and the day trips have not yet arrived. Attach to the pier under the Church of St. Antun, the abbot who dominates the whole port and is a great guide for navigation as the port is well hidden by the steep coastline. Take a stroll through the town alongside the old villas, houses with colourful facades, through the city in the shade of centuries-old pines. The clean aromatic air was recognized way back as extremely healing, so it has been a health resort since the Austro-Hungarian monarchy.

Be sure to visit the Blue World Research Institute, a marine education centre, whose museum offers a wealth of information on, among other things, the bottlenose dolphins that flourish in these waters.

No matter how much you wish to stay in Veli Lošinj or neighbouring Rovenska, we will continue sailing further north towards the cape of  Cres Island - Punta Križa. It is one of the regions with the most coves, bays and beaches on the Adriatic. In such a small area are located turquoise bays with sandy beaches and green bays where you feel as if you have sailed into a forest. Check out the forecast and choose from: Pogana, Baldarin, Meli, Vlaška, Kolorat, Majiška, Ul, Vrč and many other safe bays, rich in flora and fauna. Dive in, enjoy the riches of the sea, lie down on the beach, on a bed of sand and seaweed. Wait for the night and catch the stars, because of the wildness and the absence of artificial light, they seem so close here!

Twenty miles to Punat. Sail north with the morning bura, perhaps not too close to shore so you are not distracted by the beauty of Zaklopica or Toverščica Bays, and it goes without saying, to Mela or Koromačno with its beaches in caves. Oh no! Stop yet, take a swim, throw your anchor in Kruščica, a deep bay with a gorgeous shoreline or in the Ljubav (Love) Cave in Plavnik!

The town of Krk, just 2 miles away from the Punat marina - here you will fill up the tanks with fuel at one of the two pumps, under the walls of the old medieval castle. I recommend on the outer one because the inner one is shallower and often cluttered with smaller speedboats.

Everything comes to an end, and so does this journey. But Punat is not to blame! In fact, you have only passed the first of many possible routes from this starting point.

Cres, Istria and the outer islands of Olib, Silba, Premuda and Unije are still to be visited, and I am so sorry I did not place them on this trip. For those more experienced, courageous and eager to return to nature, there is also the Velebit Channel, etc.

But as we are already in Punat, we visit it, its waterfront and restaurants, board a taxi boat and visit Košljun - an island of outstanding flora with over four hundred plant species. The Franciscan Monastery - let’s meet in its museum with the history of the island of Krk. Or we just take a walk along a trail or along some of the landscaped paths through centuries-old olive groves, climb to the Three Crosses and immerse ourselves in the colours and scents of the evening once more.

Sailing in a northern direction through the Velebit channel, off the northern Croatian coastline, between the islands of Rab and Krk, we ..

Krk Island! No matter how many times I have sailed around that island, it still surprises me with something! Yachtsmen are familiar with ..