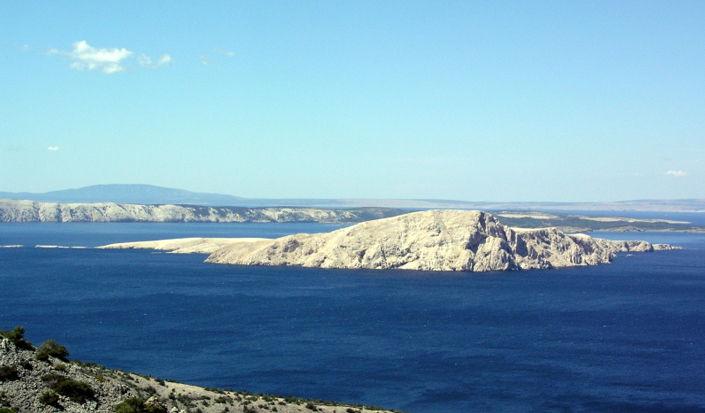 Sailing in a northern direction through the Velebit channel, off the northern Croatian coastline, between the islands of Rab and Krk, we came across a set of three smaller islands. One in particular cuts a striking sight rising dramatically, bone white out of the cobalt blue Adriatic Sea. This rocky outcrop called “Goli Otok”, which means “Naked” or “Barren” Island, derives its name from the exposed rock-face that’s had vegetation blasted clean off it by the strong bura winds that blow in from the north, especially in winter. It certainly seems that little could survive on this stark isle, yet it once held a hidden and tragic story.

We sailed around to where, in a slightly sheltered basin on the western side of the island, we saw clusters of trees and a small port called Mala Tetina. We berthed our yacht in water over 3m deep with piers that are quite high – about 1,3 to 1,5 metres – yet it’s not a problem to get on and off a boat. Ahead of the port lay the crumbling yet indomitable remains of long-deserted buildings and structures. We were curious to find out more so moored our yacht and set off to explore.

It’s hard to imagine how this beautiful serene scene, with the Velebit mountain peaks forming an impressive backdrop, could have been the place of dreadful deeds until you ramble through its ruins and learn its history. Goli Otok is known as “The Croatian Alcatraz” and was operational after the Second World War in the former Yugoslavian Tito’s regime and later, from the years 1948 to 1989. 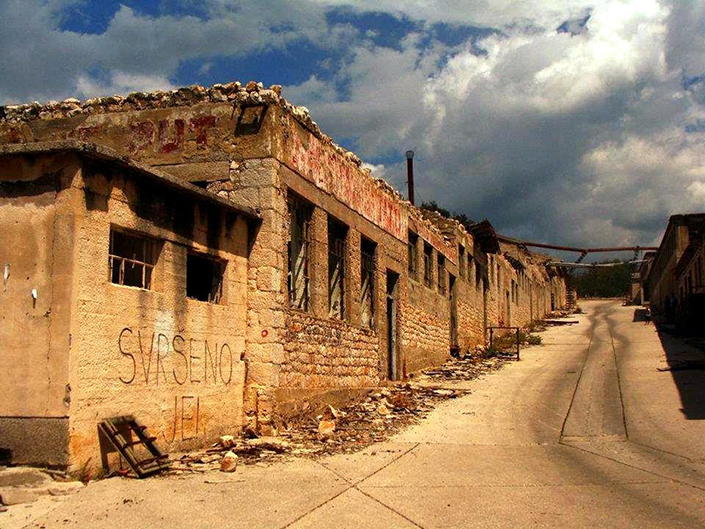 It was primarily used during the war for Russian prisoners, but the period leading up to 1956 when the Informbiro (Communist Information Bureau) was active, was kept a dark secret. Political prisoners, Stalinists and those opposing Tito’s regime, were horrifically abused and tortured. Thereafter it became a prison for criminals. Statistics show that over 3,500 prisoners were housed there at a time, 16,000 over the years, and about 400 died as a result of disease and exhaustion. Initially women were also imprisoned and were kept completely separate from the men, but were moved to one of the adjacent islands, St. Grgur. Since closure, the gulag of Goli Otok was abandoned and has been open to inquisitive tourists since.

Close to the port, there is a visitor’s reception, an administration building and a restaurant (Konoba) where we had lunch. The restaurant is open for the summer season from late May to end September, as is the cinema where, for a mere 15 Kuna (about 2 Euros), we watched an 11-minute doccie film with sub-titles in many languages. This gives one a bitter taste of what the prisoners’ lives might have been like. The cinema and an outdoor theatre provided the only relief convicts got from their sordid life with a movie or entertainment once a month. Presently in the summer, theatrical performances are held periodically depicting dramatic scenes from that time.

We browsed around a display of objects made by convicts and some of their personal items. During the summer months you can hop on a train for a 20-minute tour for about 30/40 Kuna (5 Euros). We opted to walk and it took us about an hour to traverse the island, which is only about 4,5 Kms in size.

The infamous and creepy Petrova Jame (Peter’s Cave), previously called Camp 101, is a hellhole in the ground. It was surrounded by a three-metre high wall and had no access. This is where the high-ranking officials landed and it was given its name after Petar Komnenić, the Deputy Prime Minister of Montenegro who was the first person to be thrown into it.

It’s eerie to walk among the ruins of the camp the wretched prisoners built with their own hands. Still visible is a former bowling alley, the industrial zone and remnants of factories and craft works. Also the quarantine and hospital building and Section 102 surrounded by high wires housing the jail and solitary confinement quarters. 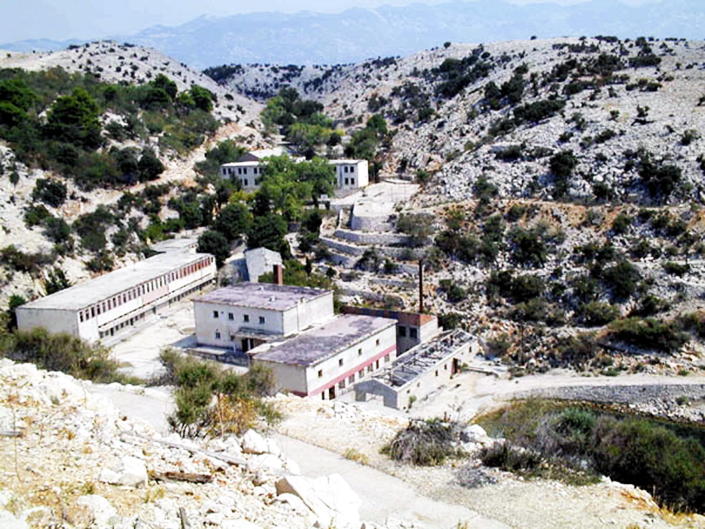 There is another, empty, larger port, almost as big as a marina called Port Melna, which is also on the western side of the island, but a little further south. It’s bordered by some industrial building ruins and used to be an old cargo port used for loading ships with stone products and heavy rocks, which the prisoners hammered and carted from the stone quarries. Both ports are protected from northern and eastern winds.

Port Melna could also potentially become one of the most significant marinas on the North Adriatic with minimal investment. The dimensions of this port are about half the size of the large marina in Cres (ACI Cres) and it would be wonderful if an investor would see fit to re-creating this port with the extremely interesting role it played in history.

To harness a fresh water supply on this dry, desert island, the prisoners constructed two large water collectors (about 100m x 50m) by laying rocks flat down on the ground. There are two open, shallow stone channels, about 500 – 700m long, running from each one, serving a group of buildings in two nearby coves where they probably had water collection tanks.

The trees, planted by the prisoners, giving the dead island life, bore silent witness to the abuse they suffered. Apart from all the concrete utility buildings, there are also some beautiful stone buildings, sheltered by pine trees, right next to the sea. These may well have housed the commander and governing managers or their offices and it’s a shame that, due to some bureaucratic hitches, they and the rest of the camp are falling into ruin. These stone buildings deserve to be restored and could well be used for something like villas, apartments or even a hotel. 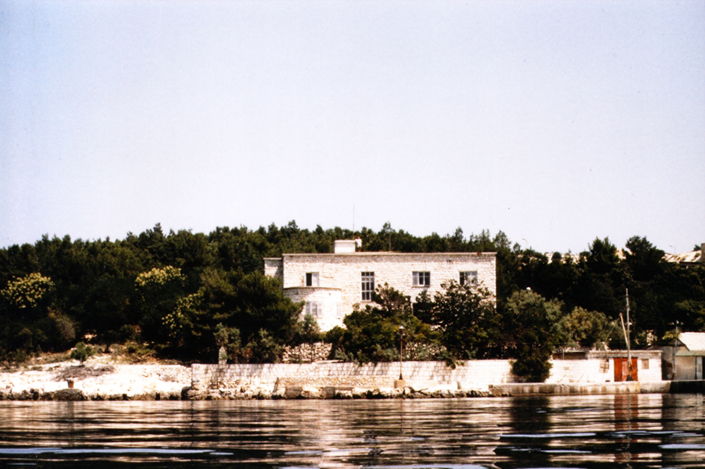 Historically the local people from the island of Rab didn’t get much benefit from Goli Otok. But now they organise boat trips there and the influx of tourists has prompted the opening of the restaurant and some of the functional features currently available.

It would be worth preserving the history of this heavily guarded camp, which, apart from one documented incident, was almost impossible to escape from. Some survivors wrote books and others shared their stories e.g. Vladimir Bobinac, who gave a heartrending account of his incarceration. He was arrested in 1951 at the age of 18 and brought to Goli Otok for a nightmare period of two years.

Their initiation into this macabre life was to run a long, snaking gauntlet of some 2,000 convicts who thrashed them and swore at them. Their lives became hell and they called it the underground system of hades where the method the authorities used to break them down mentally and physically, was to instigate the convicts to abuse each other. They became parts of a mass of distraught men who beat each other, yelled and swore at and spied on each other. As a result nobody could be trusted. When punished, they were forced to do hard physical labour. As the author of a book titled “Bando, Sagni Glavu” (Bandit Bow your Head), Vilim Lonćaric, said, ‘Human strength is limited. A man can only take up to a certain point and then the moral decline begins’.

They ran the gauntlet every night, were fed corn porridge and something akin to coffee every morning, and only beans for lunch and dinner. When punished, they got no food. As a result many convicts suffered from avitaminosis and the lack of vitamins caused many to go blind. They were filthy dirty, smelt and were dressed in rags, which were old, torn up soldiers’ uniforms.

In 1953 Stalin died and the situation changed. Bobinac was transported, along with many others, to Montenegro and worked on the Belgrade to Bar highway for three months, after which he was released. After complications with gaining employment owing to his imprisonment, he finally settled into a job as a History Teacher at Krk High School. After his retirement, from 1994 onwards he ran occasional tours to Goli Otok and passed away in 2014 at the age of 91.

As we raised our sail and followed the breeze on a calm, blue sea in reflective silence, we reminisced on the strength of the human spirit to survive such atrocities and regain the strength and desire to live on. Bobinac felt inextricably bound to this island and his desire that the site be preserved as a memorial and reminder of a time that should never be repeated, will hopefully one day be fulfilled.

Wow! this is so beautiful and attractive, the northern Croatian coastline.
Ages of Sail - 2020-05-08

Interesting info . Well written . Such poor conditions for people who had no hope.
Showing 1 to 3 of 3 (1 Pages)