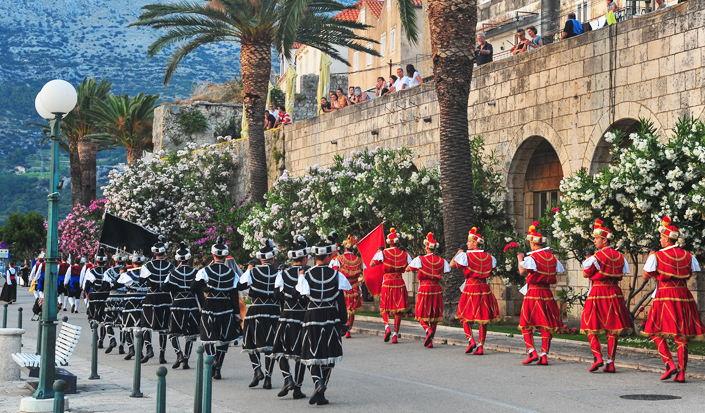 If you see a young man dressed in a strange uniform and armed with two swords while mooring your boat in the port of Korčula, do not be alarmed. This man is a Moreška dancer. The Moreška sword dance in Korčula has been a well nurtured tradition since the Middle Ages, and has been granted the status of a protected intangible cultural property of the Republic of Croatia since 2007.

Together with Marco Polo, the Cathedral of St. Marco, the Korčula fraternities, stone masonry, wooden shipbuilding and water polo, Moreška is part of what makes Korčula what it is. The honour of being a moreškant is passed down from generation to generation among the young men of Korčula, as is the honour of being Bula among girls. So it's not uncommon to see boys of two years old walking in a circle holding bent arms with their fists on their shoulders saying “bam bam bam …” They barely know how to speak yet, but it's clear to everyone that they're Moreškants. They do not know what destiny their lives hold, whether to build ships or sail the world's seas, but it is certain that they will be moreškants, water polo players or members of the Korčula fraternities as their fathers and grandparents were before them.

In Korčula the traditions of old live on almost as strongly as they did centuries ago.

Being a moreškant is still an honour and desire for citizens of Korčula. Thus, in the town of Korčula, with about 3000 inhabitants, there are two cultural societies which cultivate Moreška. 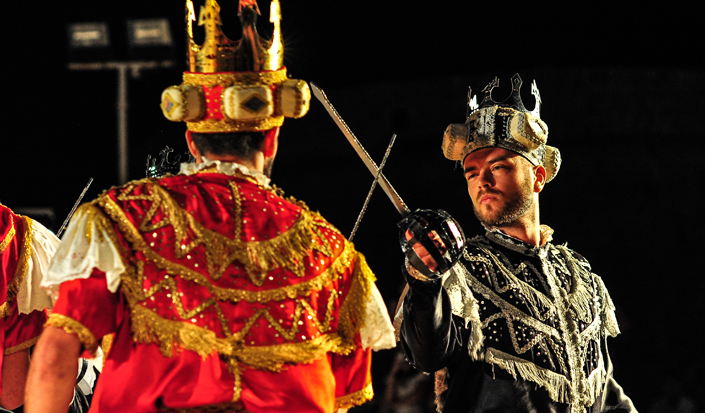 In the warm summer months, when moreškants pass through the city on their way to one of their many performances, hundreds of tourists follow in their footsteps, delighted with the colours of their uniforms and the beauty of the young people who wear them proudly. This sword dance used to be danced all over the Mediterranean, but today it only survives on Korčula, although it is not its source. Moreška was "imported" to Korčula but remained to become an integral and important part of the culture and tradition of the city.

“Bam bam bam,” the children continue their imaginary sword dance. In the next few years they will have real swords in their hands. While children all over the world are fighting virtual swords, in Korčula, children learn the art of swordplay with real iron swords. During the performance, the sound of metal hitting metal echoes, sparks fly and swords swell from the force of the impact. Moreškants are the knights of the
modern age, fighting for the love of a girl and justice, something that is slowly
being forgotten in this day and age.

Moreška is a dramatic dance stage performance in which textual, musical and choreographic elements intertwine. The dramatic part, the part preceding the famous sword dance, is played by four characters: a black king, a white king, Otmanović - the father of the black king - and Bula - the only female character. The black king, Moro, son of the black Arab emperor Otmanović, abducted the white king Osman's fiancée, Bula, by putting chains on her hands. Osman wants to get his fiancée back, and Moro is ready to fight. After a quarrel, the kings agree to win Bula’s love through knighthood. The armies of the black and white kings arrive, carrying swords, led by a flag bearer and accompanied by drums. Through dance steps and powerful sword strikes these two armies, composed of twenty-four Moreškants - twelve on each side, begin fighting for the love of Bula. Moreška consists of seven swordsman figures -kolapa - and an introductory figure called Sfida. 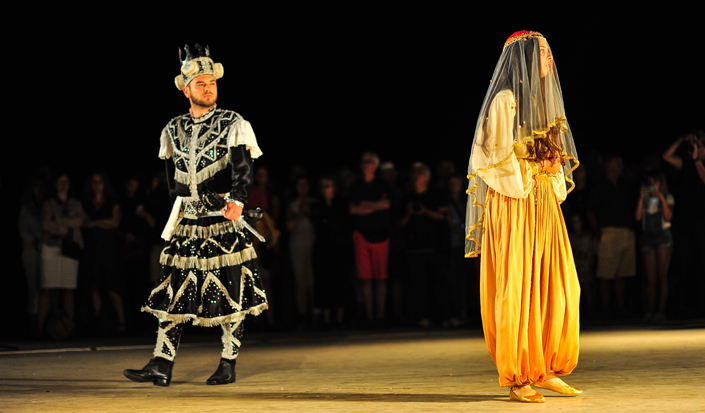 Today's Moreška is performed with musical accompaniment composed by Krsto Odak. However, in recent years, different performances of Moreška have been seen; Baroque Moreška during the opening of the Korčula Baroque Festival and Rock Moreška. But regardless of whether it is danced in an "ordinary", baroque or rock style, it is always danced ("bati") in an equally heartfelt manner, reverently and lovingly in respect of the traditions that came before.

Moreška was previously performed once a year, on the feast of St. Todor, co-protector of Korčula, on the 29th July. As one of the symbols of Korčula, it was also performed during the visit of exemplary guests to the city. Moreška has been performed before kings, princes and presidents of nations, and around the world.

In recent decades, Moreška has been performed several times a week during the tourist season (Mondays and Thursdays at the summer cinema) and as part of the Korčula Festival of Knight Games. Therefore, if you can, ensure you plan your cruise route to visit Korčula on a day when Moreška is performed, which is not to be missed.