Mljet - Forested Haven of the Adriatic 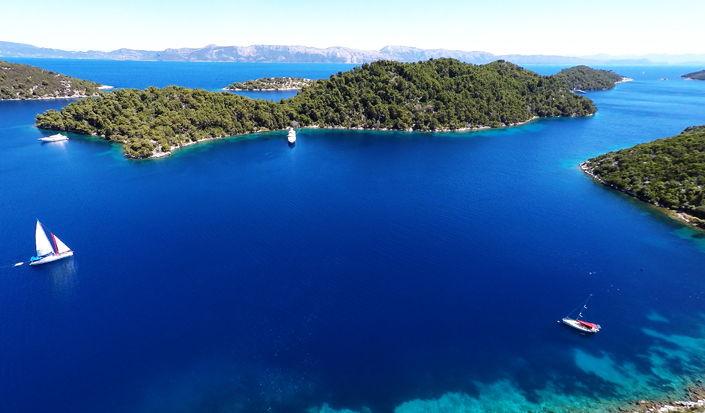 Located in the Southern Adriatic, Mljet is one of the islands that might have even been a location from Homer's ancient works. A forested haven sprouting in the middle of the salty Adriatic Sea, this island is an excellent nautical location thanks to its well-indented coast and fascinating anchorages and coves. Rich with historic, cultural and natural wonders, it’s not hard to imagine Mljet being a dwelling place for Calypso, the famous sea nymph from Homer’s epic poem Odyssey.

Nature’s Work of Art - The Salt Water Lakes of Mljet

There’s no spot on this island that isn’t brimming with varied flora and fauna, but in addition to all these, Mljet is a home to an interesting geological phenomenon. The northwestern part of the island is, in fact, a National Park that prides itself in its untouched nature and two salt water lakes; Malo Jezero (the Small Lake) and Veliko Jezero (the Great Lake). These lakes are actually sunken limestone valleys that were flooded by the surrounding seawater. Since the two lakes belong to the area of the park, all sailing and motor vessels are strictly forbidden from entering. There’s a channel joining the lakes and the current here is quite strong so while downstream swimming gets pretty enjoyable, challenging the stream is sure to be strenuous. Any type of fishing is also prohibited in the area of the lakes, which makes this an excellent spot for snorkeling. This is a place of relaxation for all living things, fish included, so while you snorkel it’s possible to get within touching distance of various and sometimes quite exotic lake dwellers. The lakes are also exceptionally clean which means that visibility is great as well. 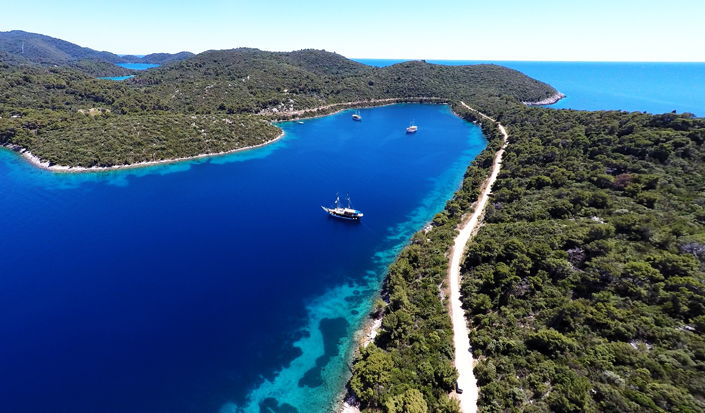 An Island within an Island

Just like a site from a historic movie, Veliko Jezero envelops the St. Mary’s Islet that protects the serenity of a charming Benedictine monastery, its gardens and the beautiful church of St. Mary next to it. Due to being rebuilt during various periods, the convent displays an interesting mix of Romanesque, Gothic and Renaissance elements.

In order to enter the National Park area it’s necessary to buy tickets which are available at a price of 70 kn for adults and 30 kn for elders, students and children above 7 years of age. There are a few roads leading up the park but it’s not possible to enter the park with a motor vehicle so you might consider some other form of transport. There is a 10 km track around the lakes and the scenic surrounding make it perfect for a relaxed walk or a refreshing bike ride. If you don’t own a bike, you can rent one at Pomena or Polače. 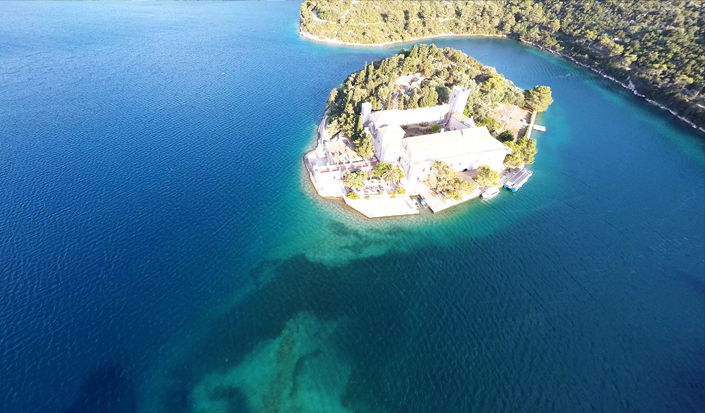 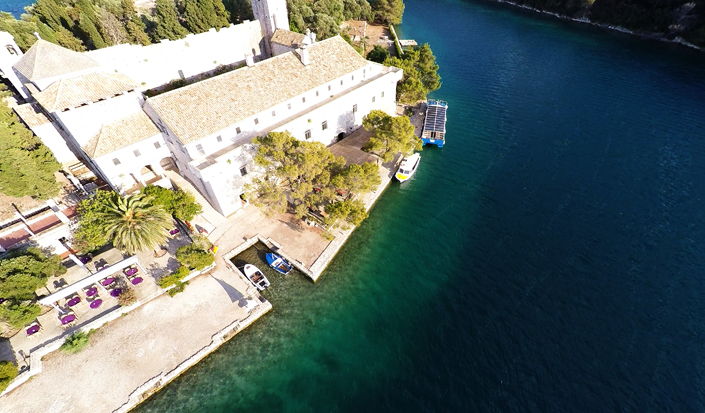 It’s impossible to say with certainty, but Mljet is suspected to have been both a resting place for Odysseus as well as a shipwrecking site for St. Paul. Even though other islands also claim these titles, you can’t deny the mystical charm of this Adriatic emerald. If you wish to consider the validity of these stories for yourself you may visit the Odysseus’ cave, a geomorphologic phenomenon said to be the place where Odysseus lingered, brooding over his homeland while being kept on the island by the charms of an enchanting sea nymph Calypso. It’s quite tricky to reach the cave by land but it’s definitely a perfect place to visit by boat as you can swim into it through a 4-5 meter wide entrance. The cave’s ceiling collapsed due to the fragile limestone material, making it an interesting spot for swimming and diving thanks to the light playing with the beautiful azure hues of the sea.

In addition to the mythological references this island has a rich history since it was frequented and inhabited since Antiquity and through various historic periods its admirers left their mark on the island’s architecture. The oldest architectural remains are the ruins of what once was an impressive Roman villa, the third largest, well preserved Roman monument on the Croatian coast.

A Green Island Full of Life

In contrast to the impressive history, we can place the immortal timelessness of Mljet’s nature. This is truly a botanist’s heaven since it has an impressive variety of plant life including forests of Aleppo pine and Holm oak as well as some endemic species like Centaurea Ragusina. If you prefer animal life to greenery, you will not be disappointed either, since Mljet has an interesting wildlife that curiously includes one non-domestic species, the mongoose. These furry mammals were introduced to deal with the snake population of the island, but later on caused quite a chaos by extending their diet from reptiles to domestic poultry and various birds. Nowadays, we may say that nature balanced itself and the mongoose found a reasonable role for themselves in the rich fauna of Mljet. 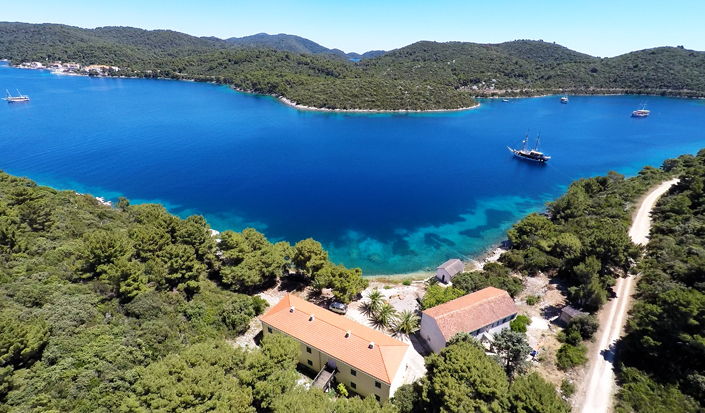 Mljet is yet another perfect spot in the Adriatic to visit by boat, not only because of its well-indented coast but also thanks to its vicinity to other attractive locations like the Pelješac peninsula, the islands Korčula, Šipan and Lokrum as well as the famous city of Dubrovnik. If you’re considering renting a yacht to make Mljet the number one location for your sailing holiday, Dubrovnik is the best place to start this voyage. If you’re planning a longer and more extensive sailing adventure in the area you should also consider Makarska and Split as starting points.

Even though the island has a particularly benevolent climate there are occasional gusts of sirocco and generally when it comes to anchorages it’s always better to be safe than sorry. In this context Mljet definitely doesn’t disappoint.

Due to the high indentation of Mljet’s coast there are quite a few natural anchorages. When it comes to safe havens, Okuklje harbor and Polače bay take the prize. Polače bay is considered one of the safest harbors of the Adriatic thanks to being sheltered by 4 smaller islands, while Okuklje has been named Porta Camara by the Italians, due to being closed off and sheltered like a room. There are no fuel berths on the island so make sure to fill your fuel tanks in Dubrovnik. When it comes to water and electricity, you can get it at the hotel quay in Pomena and at most of restaurant quays.

If you try out the alluring and rejuvenating charms of Mljet you’re likely to understand why it took Odysseus so long to leave the similarly attractive shores of Ogygia.