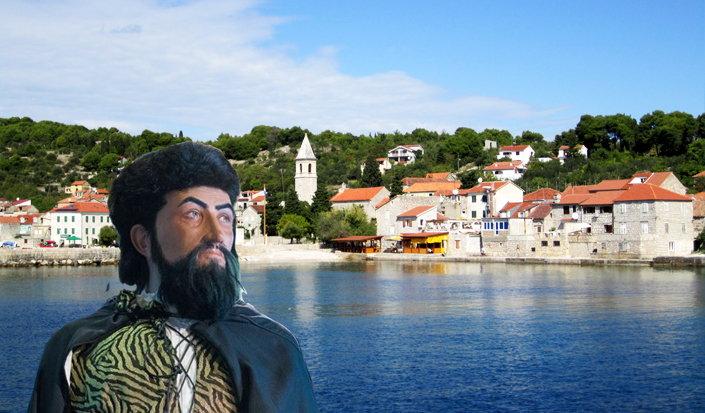 Inventor, mathematician and philosopher Faust Vrančić is most widely known for his invention Homo Volans, or the Flying man, one of the first tested and first known examples of modern parachutes. His parachute design bears an uncanny resemblance to old sails of ships during the 17th century and was most likely inspired by the effectiveness of these sails. These old sails have developed over time into the modern sails used today by boaters as they tour the coasts and islands of Croatia on their vessels. It is lucky, then, that the final resting place of Vrančić is situated in a church on the picturesque and easily accessible island of Prvić, allowing every traveller of the Adriatic coast and lover of the sea to visit and pay homage to the legacy of this great inventor.

The island of Prvić is a small island just off the coast of Vodice on the Croatian coastline. There are only two villages on the island, Prvić Luka and Prvić Šepurine. There is only one hotel on the island but there are many local apartments for rent. There are also a few restaurants to visit to sample the local cuisine. Vrančić, at his personal request, was laid to rest in St. Mary’s Church in Prvić Luka and as tribute to him the locals have built a memorial centre and museum dedicated to his life and work. This museum has created significant interest for the island and has encouraged the world to regard the importance of Prvić island from a cultural and historical perspective. The memorial centre is home to a full-size model of his Homo Volans, which is rumoured to have been tested by Vrančić, at over the age of sixty, by jumping from St. Mark’s Campanile in Venice. When visiting Prvić Luka, boaters can moor their vessels either by the breakwater or anchor and there are buoys for mooring.

Models of Faust’s collection of inventions, Machinae Novae, are also on display in a permanent exhibition in the museum along with multimedia and other interactive content that allows family members and tourists of all ages to experience hands on the fascinating inventions of Faust Vrančić.

The centre also contains many examples of Faust’s literary and linguistic ability, such as a collection of his poetry and a copy of his five language European dictionary, one of the first of its kind and the first dictionary of the Croatian and Hungarian languages. Many of Vrančić’s personal letters, documents and artefacts can be found in the museum as well, documenting his life and his will to be buried on the island of Privć along with his manuscripts.

Faust Vrančić was born in Šibenik, but had a summer family home in Prvić Šepurine, which he often visited to enjoy the peace and serenity that comes with a holiday on the island. It is very clear the love Faust had for this small island, from visiting it throughout most of his life and finally choosing to be laid to rest surrounded by the tranquillity of this beautiful place. This small island in the Adriatic Sea has become a unique part of Croatian and world history and definitely should not be overlooked when cruising the Croatian part of the Adriatic.