Home » Headlines » Sailing to Vis - the Mediterranean as it once was… I Promise!

Sailing to Vis - the Mediterranean as it once was… I Promise! 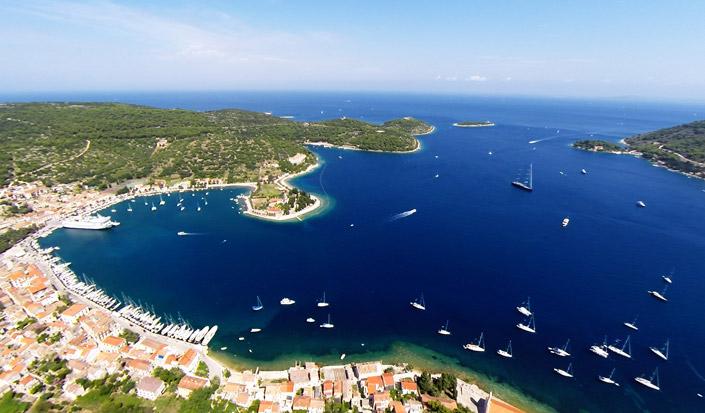 Imagine yourself on a boat, in the middle of the cleanest sea in the Adriatic, enjoying a warm and breezy summer day, wrapped in the fragrance of ancient cuisine and tradition. Sailing in the area around the island of Vis grants all this and much more.

In addition to being an island of exceptional beauty, Vis also stands out as a specifically nautical location due to its distance from the mainland and numerous alluring bays and coves for exploration, that also offer plenty of safe anchorages. Just like the rest of Dalmatian region, the island is blessed with moderate climate which includes pleasantly hot summers with a stable breeze of sirocco to cool your brow and almost no rain to speak of. Despite the winds being mostly moderate during the summer, we want all sailors and yachtsmen to stay wary of gusts in the channels surrounding the island, as well as the occasional strong bursts of sirocco.

In addition to being nestled in a pocket of very favorable climate, Vis also has another thing playing in its favor. Unlike majority of islands in the region with their rocky and limestone terrain, Vis has particularly fertile soil which makes it rich in agriculture products and plant life.

People of Vis like to take it easy, and it would be a shame to disturb such a relaxing tempo of life, so give yourself a chance to accommodate, it’ll do wonders for your well-being. In your breaks from the explorative sailing around the island, you might, occasionally, set your feet on solid ground and find a nice shaded spot to enjoy a languid cup of coffee or perhaps a lazy snack. Anchoring is not a problem, especially when it comes to Vis Town, due to a large and secure bay where the town is settled. If it happens that large sailing boats and yachts already occupied all the spots on the quay, don’t fret. The Bay of Saint George, where Vis Town is settled, is very spacious and it’s also naturally protected from the open sea and wind which assures plenty of anchoring spots to go around. All the possible anchorages are also quite close to the shore and after a day of sailing, tendering to shore is probably not going to be a problem. If you would, nonetheless, like to secure a spot in the harbor, you should stop with your sailing adventures a bit before the evening and set course for Vis Town harbor earlier than usual. You see, there is no possibility of booking a spot in the harbor and it functions by the ‘first come first served’ approach. Due to this, it’s good to keep in mind that, during the summer months, Vis turns into a remarkably popular nautical destination and there are plenty of chartered boats and yachts around the area, and just like you, they are also looking for a safe harbor to settle in. 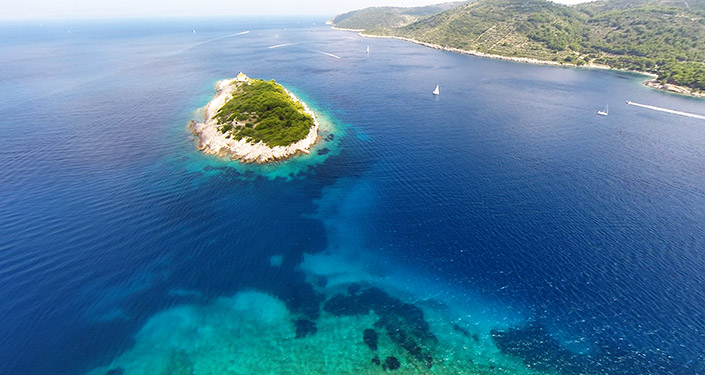 When it comes to food, Vis has a lot to offer, a perfect blend of fishing and agriculture; it has specialties for everyone's palate. Indulge in varied seafood specialties the island has in store, some of them being: pasta beans with seafood brodo, a varied assortment of grilled fish, fish soup, octopus salad, seafood risotto etc. Also, make sure not to shy away from your veggies! Due to being an agricultural, Mediterranean haven, Vis offers the best and freshest of the soil. The gastronomic offer includes a wide variety of sweet delights as well, some quite intriguing and fragrant; cinnamon ice cream and carob cake for example.

And to blend it all together, Vis offers a wine that is actually an indispensible part of the islands’ history. 'Plavac' is a red wine brand, dating all the way back to the 300 B.C. when it was recognized by the Greek chronicler Agarthid as the ‘best known wine’, due to its distinct flavor of wild almond. To counter Plavac, there is another distinguished wine brand on the island, and that is ‘Bugava’ or ‘Vugava’, a white wine known for its sweet and rich taste.

The Clash of Ancient and Recent History

Wine isn't the only historic treasure of the island. Vis, or as ancients knew it, Issa, is an island that consistently proved its value through many historic periods, maintaining its tradition and skillfully adapting to new circumstances. So as you may suspect, there is a lot to see in terms of heritage and cultural riches. Starting from antiquity you may want to stick around on land, long enough to visit the archeological museum found in Vis Town, within the former fortress build by the Austrians in the 19th century, housing a variety of interesting items from the Hellenistic and Roman period. While you're at it, why not also sneak a peak at the partially preserved, ancient Greek necropolis, the only one of its kind in Croatia. In addition to ancient remnants, Vis Town also has echoes of other historic periods like the architecturally and historically peculiar Church of Saint Jerome and its Franciscan Monastery, located on the small Prirovo peninsula. 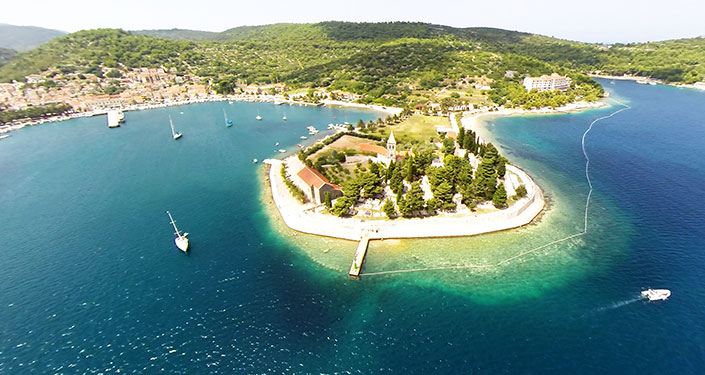 However, if you're likely to appreciate more recent history, especially if you're a military history buff, there are several sites you may want to visit. You can start with Fort George built by the British, after a victory in the Napoleonic Wars as a means to oversee the naval traffic of the port of Vis. Today, this historic gem became an innovative venue for both daytime and nighttime entertainment. Another convenient former military spot to visit is ‘Jastog’( the Lobster) located in the Parja bay. It is notable for being one of the largest sea trenches in the area. You may visit this submarine tunnel from the sea, moor in the vicinity and take a closer look. Another seaside location would be a former cannon and rocket base located on the cape Stupišće. Other possible former army hotspots include the abandoned airfield of the WWII allied forces, the army bunkers Samogor and a few others. Just note one very important piece of information; before you march on, into exploration, make sure you have a local guide with you since many of the objects were mined during a recent war and since no official mine plan exists, it's still not certain whether all the locations have been properly cleaned out. If these sights are not a 'must-see' in your book, it might be better to leisurely lounge on your boat, crack open a bottle of Plavac and observe the seaside objects from your own comfort zone.

A Safe Resting Spot after a Day of Sailing

There are times that you might not even want to leave the comfort of your chartered vessel. Well, in that respect, Vis also has plenty to offer; cleanest seawater in the Adriatic and many hidden, natural beaches perfect for a visit by boat. And after a day of beach-hopping and hidden cove exploration, you must be craving for a secure spot to drop your anchor. You have three main anchorages at your disposal: Stonca Bay (half a mile NNE from the Vis harbor), Rogačić Bay (a mile N from Vis Town, round the peninsula) and Stončica Bay (at the NE tip of the island), just make sure to check the quality of the sea bottom before dropping your anchor. There are also 2 ports on the island: the harbor in Vis Town and the breakwater quay and mooring buoys in Komiža. Make note that the fuel berth is only available in Vis Town, while you can get water and electricity both in Komiža and Vis. And to point out once again, in addition to its harbor, Vis Town is settled in a large bay, naturally protected from the open sea by the islet Host, with plenty of space to drop your anchor. 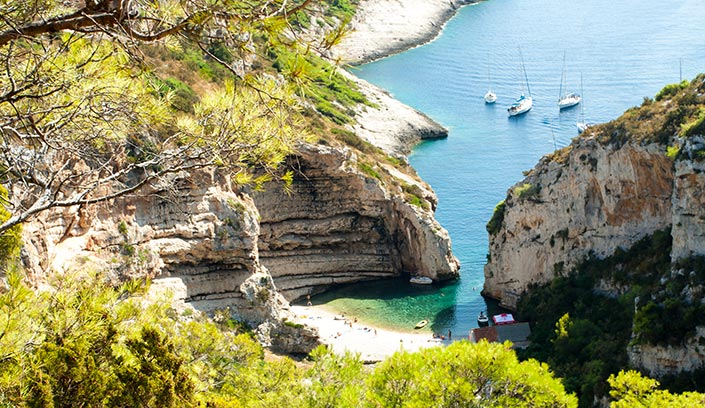 The Best Boat for the Trip

In addition to the astounding natural wealth and the abundance of Vis coastline, the rest of the island is also pure joy to explore. You can rent a motorcycle or a car if you wish to explore more inland, but still, there are some spots on the island that are available only by boat. Therefore, if you are not visiting the island with a boat, make sure to book, in advance, various daily trips by boat offered on Vis. If you plan to charter a yacht or a boat, that will enable staying in the region for several days, you’ll have to book it somewhere else, since Vis doesn’t have a charter base of its own. In any case, a nautical destination like Vis simply pleads to be explored by sea and only this way you can truly experience what this astounding, offshore island can offer.