Home » Headlines » Zavratnica – a hidden gem on the Adriatic

Zavratnica – a hidden gem on the Adriatic 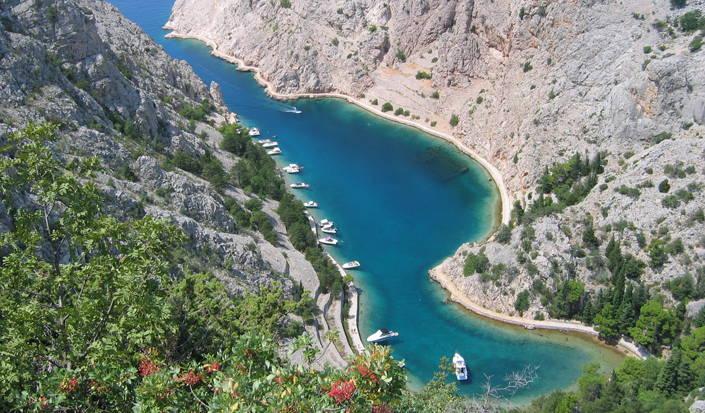 Croatia is a land of many secret treasures and offers a myriad beautiful places for sailors to explore. One such jewel is Zavratnica, an inlet on the Velebit channel, slightly south/east of the southernmost tip of Rab island on the northern Adriatic coast.

At sunset we had sailed into the quaint, small town of Jablanac, just over 0,5 NM north of Zavratnica. Sailors take note: Depth on the South/Westerly side of the port is 3,2 m. Shops, restaurants and hotels in Jablanac are closed in winter and then the nearest shop is in Stinica, north of Jablanac. There is also a ferry that runs from Stinica to Mišnjak on the southernmost point of Rab island. There is no boating petrol station in the Senj / Zavratnica area, the nearest being at Rab town’s port – about 7 NMI from Zavratnica. (If you’re sailing southwards along the coast, Karlobag is the next one, but it’s a bit further.) 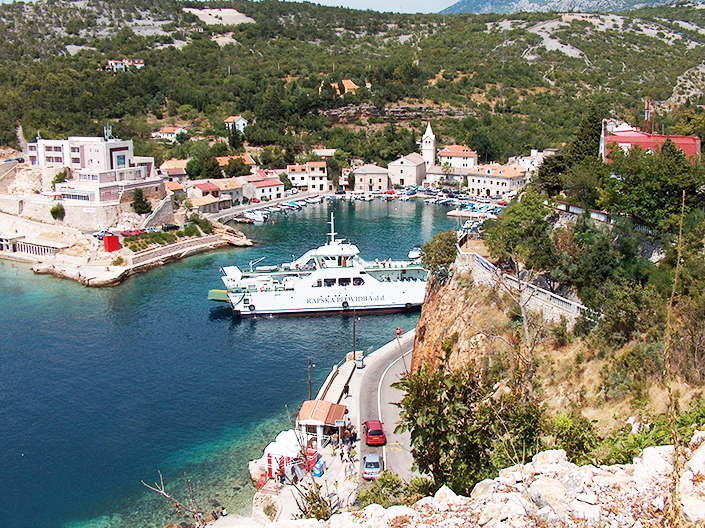 Late May/early June is a great time for sailing as you can beat the summertime crowds. Everything is crisp and fresh with the luminous colours and scents of spring, although the sea is a tad cooler. After shopping and a traditional local dinner at a cosy restaurant, the excellent day’s sailing took its toll and we gratefully tucked into our berths and drifted into a deep sleep.

There is nothing better than waking up to the sound of seagulls calling and splashing wavelets against the sides of a yacht, with the smell and salty taste of the sea on your lips. After breakfast and coffee we were ready to sail out to Zavratnica.

Mooring yachts overnight in Zavratnica is not permitted, hence the reason we had decided to stay in Jablanac the night before and set sail in the morning. There are limited times to enter Zavratnica and from May to end August it’s 11h00 to 19h00.

You could also leave your yacht berthed in Jablanac and take the 2 Km long promenade walk (20 minutes) alongside the sea. You would go through a rock tunnel before entering the cove. Either way the landscapes looking onto Rab Island are beautiful in a stark way, with the cobalt blue of the sea offset against the shores of alabaster white rocks.

The Velebit channel is notorious for its wild, unpredictable gusty NNE to ENE bura winds (particularly in the winter), which blow off the mountains to the sea and strip the rocks bare. Luckily the weather forecasts these days are pretty accurate so at least yachting enthusiasts can plan ahead. Take heed, experienced local seamen have a proverb: "When the bura sails, you don't!” The Scirocco winds, locally known as jugo, come from ESE to SE and usually bring stormy weather.

Luckily the wind was in our favour and after sailing south before long we reached the large (appr. 200 m wide) bay in front of Zavratnica. If you didn’t know it was there, you could easily miss Zavratnica as it’s tucked away beyond a narrow opening. We dropped the sail and cruised through the slender passageway, which opened up into a wider stretch.

Wow! We were struck by the breathtaking beauty of the landscape. Grey-white limestone cliffs, scattered with verdant green pines, cypresses and shrubs, rise up on either side to meet the majestic Velebit mountains and cascade down into serene, crystal clear, aquamarine waters. 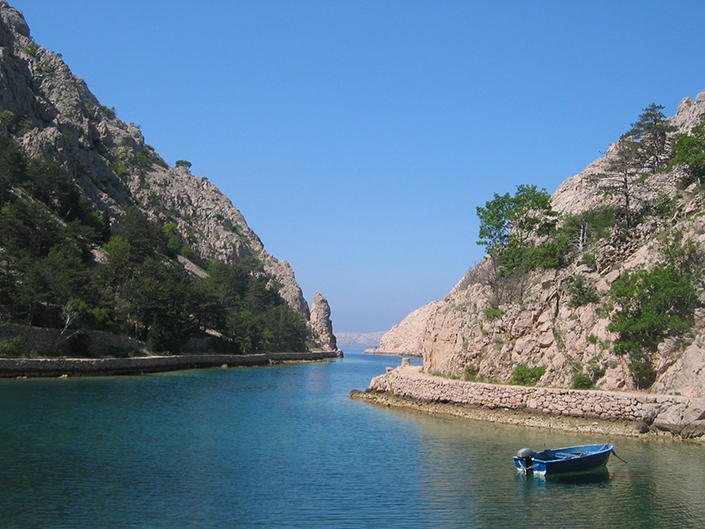 A guy in a small fishing boat approached us to collect our entrance fees. It’s only 30 Kuna (about 4 Euros) per person and children under the age of 7 are free. If you come with an organised tour group it’s 20 Kuna (2,7 Euros) per person.

The depth of the sheltered bay is about 18 m at the entrance, tapers off to 5 m midway and then completely shallows out to knee depth towards the very end. The whole inlet is from 50 to 150 m wide, and 900 m long, flanked on all sides by mountains. This gives it the appearance of a fjord and is often referred to as such, although geologically this is not the case. It is more like a flooded natural valley formed by once active torrents that drained off the mountains into the sea.

As legend has it, an earthquake in 615 AD caused three Roman towns to sink into the sea and the creation of Zavratnica bay.

In the early 20th century terraces were built and trees planted to prevent further deterioration from cascading water. The seaside trail and viewpoint were also established at the time, and Zavratnica became popular as a secluded summer resort for the Viennese and Prague elite.

In 1964 it was registered as “Zavratnica Nature Park” in the Register of Significant Landscapes in Croatia and in 1981 it became an intrinsic part of the Velebit Nature Park.

There are 1,854 plant species and sub species found in the Velebit Nature Park - 129 types of trees, 100 types of which are indigenous and a further 29 species were planted. What I, as a nature lover, found interesting is that 79 of these are endemic and not found anywhere else. 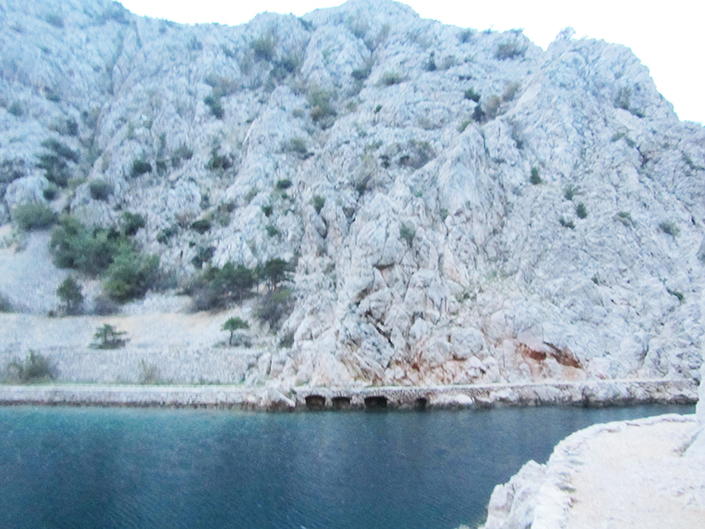 It was now time to search for the highlight of Zavratnica - the wreck of a large vessel, which was shot and sunk by Allied planes in 1944 during World War II. We kept at lookout on the port side and soon we could clearly see what was left of the German landing craft, the Siebelfähre LF126, which had found its final resting place in the shallow water of this peaceful bay.

Of course, we were keen to take a closer look and moored our yacht to one of the rings set into the rock wall nearby. We grabbed our snorkels and masks and plunged into the invigorating sea. It’s quite easy to snorkel above the ship and investigate this well-preserved piece of history. The visibility was excellent and we could see what looked like gasoline drums, reflectors and lights, crew quarters, the entrance to the cargo hold and the rudder house.

Zavratnica has become a popular destination for wreck-divers, but it’s just as easy for free divers to closely examine the ship as it lies close to the surface of the sea at a depth of about five metres.

We stretched out on the rocky beach to warm up in the sun and revelled in the quietness of our beautiful surroundings. After a while it was time to get our walking shoes, hats and water bottles, as obviously we had to experience the view from the top.

The path meanders upwards through shady trees, bushes and fragrant sage and other herbs, until it becomes rocky and exposed to the sun. The viewpoint is almost 200 m from the bottom, but the climb is well worth it. The eagle’s eye view reveals spectacular sweeping landscapes!! We could see the whole bay of Zavratnica, the wreck underwater and a boat with tourists cruising around it, as well as a couple lazily kayaking; Rab Island rises out across the Velebit channel, and a ferry was heading towards it. In the distance behind Rab we could even see Pag island. 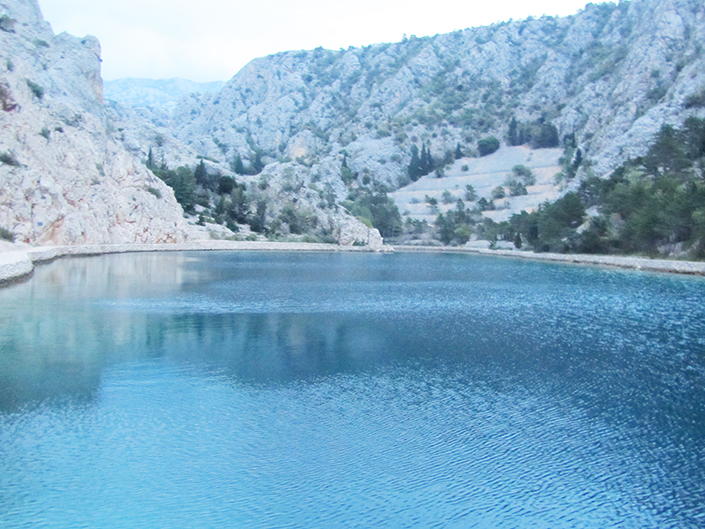 The village of Zavratnica is 1 Km from the viewpoint and there is a guest house in the village and another nearby, as well as a hut for hikers on the Velebit trail.

The Croatian realism novelist, publicist, music critic and educator, Vjenceslav Novak (1859 to 1905), who was born in Senj and wrote many books such as “A Tale of Two Worlds” and “Into the Mire: A Croatian Short Story”, would often come to Zavratnica to get his inspiration. There is a bronze plaque dedicated to him on one of the trails.

As we later set sail for our next destination, the town of Rab, I was wistfully thinking how I could easily have spent more time in the idyllic setting of Zavratnica. It certainly will remain imprinted in my memory as a beautiful gem where one can escape to and find some peace for the soul. I, too, felt inspired.