Home » Headlines » A Guide to Sailing in the Sporades Islands, Greece

A Guide to Sailing in the Sporades Islands, Greece 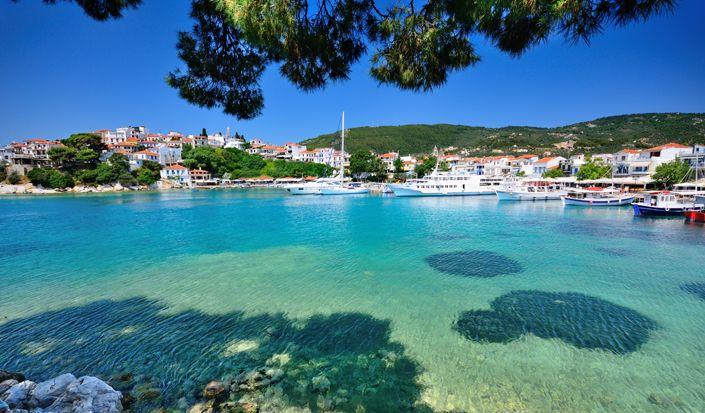 The remote and scattered green islands of the Sporades offer sublime sailing in cobalt blue waters with good, constant wind and charming harbours. What’s not to love? With more challenging sailing than the Ionian Islands, but not quite Cyclades conditions it’s great for novices who want to gain more experience and old sea hands alike. Here is our guide to ensure you enjoy the best sailing in the Sporades.

The Sporades islands are in central Greece and stretch out into the Aegean Sea, each island less busy than the previous and the outlying islands only accessible by boat.  Noted for their rich vegetation and mountainous terrain, they are some of the greenest islands in Greece. Popular places to explore by sailing boat, they consists of 24 islands, four of which are permanently inhabited: Alonnisos, Skiathos, Skopelos and Skyros. From these bases you can explore the main islands of Skiathos, Skopelos, and Alonissos, and the outlying, uninhabited Sporades islands further afield. Charter boat pick up points are Volos and Skiathos, both of which have airports and regular charter flights from Europe. A two-week charter is recommended to see the best of the Sporades.

Prevailing winds called the 'Meltemi' are from the north (sometimes NNW) providing fantastic sailing conditions. The Meltemi usually starts blowing in the afternoons and dies down by the evening, but can get up at times and may blow quite strongly for days at a time. The ‘Sirrocco’, is a southerly wind that blows every few weeks in early and late season.

Sailing from Skiathos is pleasurable and easy with prevailing winds being friendly, especially when sailing the southern route to the rest of the Sporades. Skiathos and the Sporades Islands offer many natural harbours for your boat charter and a range of beautiful beaches to visit.

When the winds are strong NW, it is recommended to stick to the southern sailing route.

The high season, July and August, is extremely busy especially on Skiathos. It’s not always easy to find a mooring space in the ports and the islands are packed with tourists. If you like to be on the party scene where the crowds are, this is the season for you.

Being on a boat, you can always sail away to a more remote spot, but it’s good to bear this in mind especially for provisioning. It’s unlikely that you will find a place if you come in the evening or at night. Temperatures are also very high at this time and its can get really hot on a sailboat, where you are exposed to the elements all the time.

The shoulder seasons (May/June and Sept/October) are quieter with a good chance of good weather, although the sea is still chilly in May/June and it can rain in September/October. These are often the months of choice for those who prefer to be away from the throngs.

Skiathos island is the closest to mainland Greece, and the busiest. It’s known for its nightlife and lively harbor town which gets extremely crowded in high season, and finding a place to moor can be tricky.  With 64 beaches to explore, most of them sandy and some only accessible by boat, it’s easy to while away the days around here. There are plenty of options to moor for the night, if you want to escape the crowds. Six miles southwest of Skiathos Town is Koukounaries Beach. Although it’s a busy and popular beach, most of the day trippers leave by sundown and it’s a charming place to anchor for the night. There are a few traditional Greek taverns to visit if you don’t feel like cooking onboard.

Directly across from Skiathos Town are the lovely little islets of Maragos, Tsougkrias and Tsougriaki, which are worth a stop. Another charming place to spend the night is at Tsougkrias where there is a small beach bar/restaurant on the beach with a limited but delicious menu. A lovely spot to spend a day or night.

The northern side of Skiathos offers more challenging sailing, especially when the winds are strong. Along the northern side it’s wilder and much less touristy and will appeal to nature lovers who like tranquility. Our favourite spots are: Lalaria beach, stunning topography with a steep cliff that drops off into the sea. Only accessible by boat, it does have daily cruises from Skiathos Town visiting regularly. Other beaches worth seeing are: Kechris Beach, Kastro , Mandraki Beach, Kriffi Ammos and Banana Beach.

Points of interest in Skiathos

Kastro, the ruins of the islands' medieval capital, are located along the west coast high above Kastro Beach. Incredible views.

The Monastery of Panagia Evangelistria, built in the early 19th Century is located 5 km north of Skiathos Town. It holds historical importance for its role in the Greek War of Independence.

Sailing east from Skiathos, you’ll come across Skopelos. This green and pleasant island has some fantastic ports to stop in for the night. Along the southern coast are the lovely ports of Glossa,  Neo Klima, Argnontas and Panormos – all great places to anchor for the night, with Panormos being the most natural with the least facilities and no quay. You can exercise your land legs and hop on a bus to visit the touristy “Mama Mia’ church from here, or simply enjoy port life with the locals. The sheltered southeast coast has many, mostly pebbled beaches, while the northwest is exposed to the wind and sea with high cliffs and without any good anchorages, except for the Bay of Skopelos. The only place to overnight on the northern coast is Skopelos Town where it’s worth exploring the small alley ways and charming shops. The northern coast is worth sailing along, if the weather permits, on your return from Alonissos for its breathtaking natural beauty.

Points of Interest in Skopelos

Agios Ioannis Church. This is the church were scenes from the Mammia Mia movie were filmed. Perched on top of a rock, there are amazing views of the island.

The Museum of Cultural Heritage and Library Perseus Athineos in Glossa village. A fascinating look into the history of the island.

The Monastery of the Transfiguration of Christ (Metamorfosi Sotira) is located 3 km east of Skopelos Town, in a lush green area. Founded in the 16th century,  it hosts an exhibition of rare icons and books.

Many sailors pick up their boat and head straight for Alonissos, and you’ll see why. The most remote of the inhabited islands, Alonissos is surrounded by the National Marine Park of the Alonissos, North Sporades. The marine park is home to the last European colony of Mediterranean monk seals, although these shy creatures are very difficult to see. The least crowded of the Sporades, it makes a great base for exploring the outer islets by boat.

The main port of Patitiri is charming, through crowded with sailboats in the high season. From here you can visit the Old Village which offers incredible views of the island. The popular beaches along the west coast of the island are worth stopping in at too and Steni Vala is a good place for provisioning and tavernas before the sail out to the even more remote isles. Opposite Steni Vala is the island of Peristera which has some wonderful inlets and anchorages, including the” safest harbour in the Sporades” – Vassiliko Bay where there is a half sunken ship to visit.

Points of interest in Alonissos

Mavrikis “Pirate” Museum in Patitiri for an excellent look into the history of the area.

Women’s Association of Alonissos, where you can pick up homemade sweets, pickled tuna, olives as well as fresh herb, spinach and cheese pies, and pasta all of which are made from traditional recipes passed on through the generations.

Islets Around Alonissos.  Alonissos is surrounded by eight uninhabited islets well-worth exploring by yacht. These are Peristera, Two Brothers, Kyra Panagia, Gioura, Skantzoura, Psathoura and Piperi (which is off limits as it is the breeding island for the Monk Seal Colony) 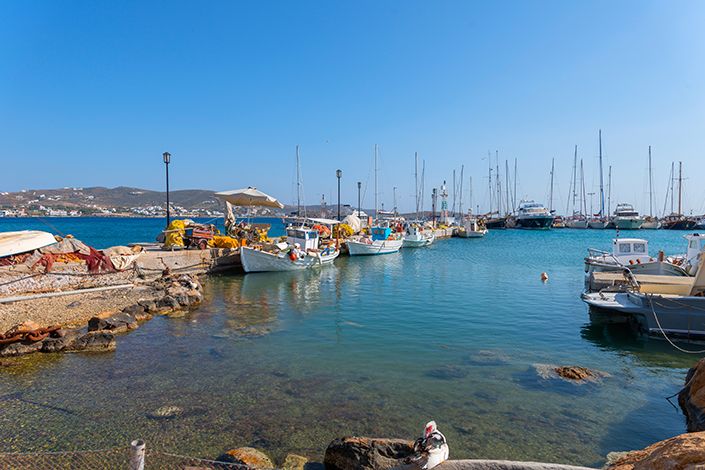 Skyros is the outlier island with a different atmosphere, more like Cyclades than the Sporades, and less sheltered too. Some distance from the others, and an adventurous sail away. If you have time, it’s well worth a visit.

Linaria is little bay where fuel, water,  tavernas and basic provisions  are available. You can also take the bus up to Chora (Skyros main town) for a better variety.

Most beaches and anchorages are found on the W-SW coast: Atsitsa, Alyko, Ag. Fokas, Pefki  and Acherounes are all worth a stop.  The islets of Valaxa S kiropoula, Sarakino and Prasso, and  the rocky bay of Tristomou, Kalamitsa beach, Kolympiada, Renes are extremely pleasant to sail around. If there are no North winds blowing, the N and NE coast of the island becomes accessible where there are a lot of beautiful anchorages and beaches.

Points of Interest in Skyros

Faltaits Historical and Folklore Museum in Skyros Town. Learn the fascinating history of Skyros. This 19th century mansion has an outdoor terrace and an excellent gift shop.

Syros Island Horse Trust This ranch is active in preserving the endangered Skyrian Horse. Its 10km northwest of Skyros Town in Trachi.

The interesting Palamari Bronze Age excavation is found at the northeast end of Skyros.  It dates back to between 2500 BC and 1650 BC.

North sides of the Sporades Island are exposed to the open sea and wind. If the winds are very strong, its advised to return along the southern route (2nd option)

A sailing holiday in the Sporades is a dream for many. We hope our guide enables you to make your vision a reality!