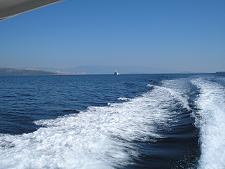 Before you decide on a yacht charter in Croatia it would be good to know general weather conditions in the Adriatic area. Opting for a bareboat charter makes you the responsible person on board - the skipper. Besides the damage on the charter yacht, the skipper is responsible for the safety of the cruise members as well. Therefore, understanding and monitoring the weather forecast is a crucial part of the skipper's role.

Even if you are not attending the cruise in Croatia as a skipper, but just as one of the guests in your own cabin on a cruiser ship or a chartered crewed yacht with a captain, you have to be familiar with the weather conditions in the Adriatic area. The reasons for this are many - from avoiding sea sickness to understanding sudden cruise route changes due to bad weather conditions.

Weather conditions on the Adriatic are determined by the position of cyclones and anti-cyclones over Central and Southern Europe. The usual direction of a cyclone's movement is from west to east, bringing warm and moist winds, which cause rainy weather, in a southerly direction. On the Adriatic the Jugo wind usually blows. When anticyclones start arising in Europe to the east, the wind turns northeast and brings cold and dry air. On the Adriatic the Bura wind usually blows. Bura winds disperse rain clouds and bring clear blue sky. The weather is stable and sunny until the next cyclone. The air temperature may be lower for a few days.

Basically, the Adriatic is a great place for sailors most of the year. The best time to sail the Adriatic is from early April until the end of October. The summer months of June, July and August are the height of the tourist season. There are a multitude of charter boats at sea, a lot of tourists and many events. During these months it could be difficult to find crew and free berths in some of the attractive places on the Adriatic. April, May as well as September and October are not overcrowded, but still have good weather conditions. The winds may be a bit stronger than in the high season. Daily temperatures are still high and it's tempting to swim. During this period there are numerous regattas.

It is recommended that you be careful while sailing the Adriatic. Regardless of the weather conditions, constantly follow weather forecasts and possible warnings. On the Meteorological and Hydrological Service page you can check daily and weekly forecasts. You can check hourly forecasts at Accu Weather.

Athens
Add to My Boats
more extra discounts...
References
“Just on my last night on the boat and I have had a fantastic time. I have loved the boat and Croatia has been amazing...”
Rob Holmes
Fountaine Pajot Elba 45
2021-10-16
Read more...

Trogir
“The marina in Punat is nice too, very clean - everyone was friendly and helpful. On the negative side: there are not enough parking spaces for the number of boats/people ...”
Christopher Smith
Bavaria Cruiser 33
2021-08-21
Read more...