Set Course for the Island of the Famous Marco Polo 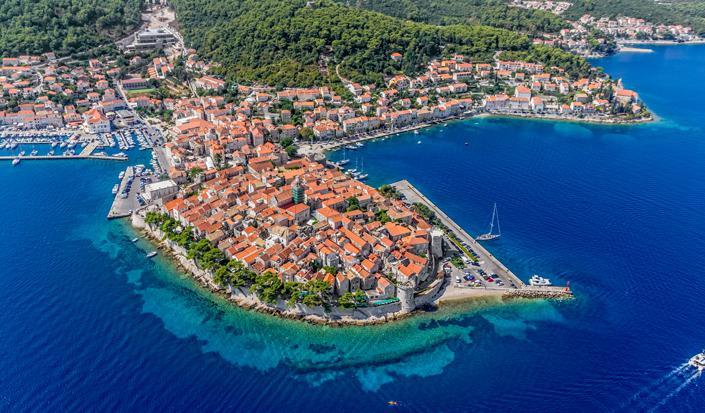 Visiting Korčula is one of the things you simply have to include on your 'to-do' list. It is the most populated Croatian island brimming with natural sites, cultural content and fun. This island offers many irresistible nautical havens and if you set your mind on sailing around it, get ready for 60 NM of pure adventure. If you're sailing from the direction of Mljet, there are 19 islets and an archipelago where you can moor and take a splash in the sea. In order to experience the historical aspect of the island, simply moor your boat in ACI marina Korčula, skim through the biography of the adventurous Marco Polo and stretch your feet in the direction of what is said to be his birth home all the while enjoying the medieval architecture of the city. The ACI marina is settled right beside the city core that is said to have given birth to one of the most famous travelers of the 14th century.  You couldn’t find a better starting point than this!

The birthplace of this renowned merchant is still not agreed upon. The Italian claim he was born in Venice and the Croatian consider Korčula as his birth home. The historians gather evidence to back these claims. Many of them point to Korčula as a plausible location of Marco’s birth. The street where the house is located fits the location documented to be the exact home where the Polo family resided. In addition to that the Polo surname is connected to the waterfowl that was called ‘pol’ in that area. The historic evidence state that Marco’s signature was in fact ‘Pol’, instead of the Latinized ‘Polo’. Even more indicative is the fact that his family’s coat of arms bore three waterfowls.

Isn’t it fitting and maybe not even coincidental, that the house believed to be birth home of Marco Polo is settled within this heart-shaped city.  Korčula City was constructed in the shape of a heart with two streets, reminiscent of fish bones, merging in the main street of the city. Heart, as a symbol of an adventurous spirit and a longing for the unknown is everything Marco Polo represented. Supposed birth house of this adventurer is settled right in the ‘heart’ of the city, north of the St. Marcus cathedral. Since April until September the house is open for sightseeing, both for groups and individuals, for a symbolic price of 12 and 20 kn.

The house of Marco Polo stands witness to a small part of his rich life and marks a starting point for this world known wayfarer. For this reason this is certainly one of the top locations in retracing Marco’s steps.

‘Il Milione’ – the Tales of the World Marvels

Marco Polo’s travel stories probably sounded quite surreal to the common folk in the area. Since he set off on a three and a half year long trip which he described in the book ‘Il Milione’, it is safe to assume that he simply started this travel wholeheartedly, fully immersing himself in its course. He traveled through Armenia, Persia, Afghanistan, Badakhshan plateau in Palmira area, all the way to the Chinese part of Turkmenistan where he continued through the Silk Road. Along the way he crossed two deserts Lop and Gobi and he carried on all the way to the Chinese borders. He had fascinating observation skills and also a keen capability to overcome the bounds of his Christian education and cross the expanse that turned him into a world traveler, merchant and writer that we speak of today. His book ‘Il Milione’ was created in prison with the help of his friend Rustichellio, and it served as an inspiration to Columbus on his explorations. Marco Polo was truly an amazing man, often regarded as an eccentric by his fellow contemporaries for his strong imagination and idealism.

Man of the Thousand Stories

World traveler and a Venetian merchant, Marco Polo, often shared his exotic stories after returning from one of his long trips. For many people, Marco’s descriptions, facts and numbers seemed greatly over exaggerated in comparison to reality. The numeral system of the time was simply not large enough for his tales and since million didn’t exist as a term, the expression used was thousand of thousands. Since Marco’s middle name was Emilio (Marco Emilio Polo) very soon the Venetian folk invented the term ‘emilioni’ which was later modified in the number million. Today, the term, million isn’t the only reminder of Marco Polo’s legacy; his name is also given to a Venetian airport, subspecies of sheep he came across on his trip through the Pamir mountain, as well as the first ship that sailed around the world in less than 6 months – a sailing boat build in Saint John in 1851.

If you’re curious about the man with thousand of thousand stories, the man with the waterfowl in his name, who’s responsible for writing one of the most translated books in the world ‘Il Milione’, set sail in the direction of the Dalmatian southern wind ‘Jugo’ and head over to Korčula. Take a stroll through Korčula and feel its medieval rhythm.  Rediscover Marco Polo’s birth home, look around and think on what it would’ve been like, 800 years ago, to cross the world and bring the treasures of the Far East to the Mediterranean.