Home » Headlines » Muline - at the source of olive oil

Muline - at the source of olive oil 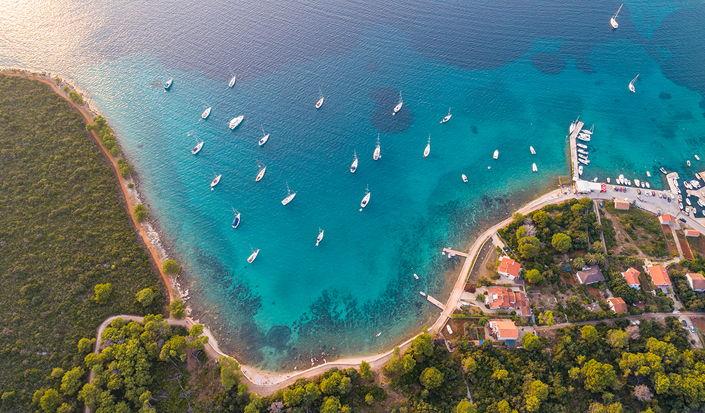 The island of Ugljan is an integral part of the Zadar archipelago, being the closest island to the cultural and economic centre of the county, the city of Zadar, at only a few nautical miles apart. The town of Ugljan is the largest of the island’s seven settlements. It is located in the north-western area of the island, which, due to its relief characteristics, has the most hours of sun in this region. The town consists of nine hamlets. Muline is one of these hamlets and is, without exaggeration, a paradise on earth. Muline has a harbour and mooring, and boaters are very welcome in all places around the island, which has plenty of sheltered bays suitable for safe anchoring and various smaller or larger moorings.

Interested in art, culture, history, olive growing, good food and beautiful beaches? You can find all this in Muline.

Perhaps one of the most important attractions in Muline, or even the whole Ugljan, is related to the production of olive oil. This is not difficult to assume, considering that Ugljan is also known as the island of olives due to the vast amount of olive trees grown on the island. The most important archaeological site on the island of Ugljan, the remains of a 1st century ancient oil mill in which the famous Liburnian oil was produced, is located in Muline. The name of the oil is derived from the old name for this area of the Adriatic coast, Liburnia. Liburnian oil was so famous that even the book " On the Subject of Cooking " by the Roman writer Apicius contains a recipe for transforming the taste of Spanish oil to that of Liburnian oil by mixing “helenium, cypress root, bay leaves and salt” into the oil.

Interestingly, this oil mill was one of the strongest in the Mediterranean and had as many as 5 presses. It is the largest oil mill in the Adriatic explored and documented so far. It has been preserved to such an extent that even today, with some investment, it could be put into operation to produce genuine Liburnian oil once again. Right next to the oil mill and the farm, of which the oil mill was a part, there was a large port from which the olive oil produced in Muline was transported to all parts of the Roman Empire. Additionally, this archaeological site is home to an economic complex consisting of a mausoleum, a memorial church and an early Christian basilica dedicated to St. John. Today's boaters who visit Muline Bay anchor in what is basically the ancient port. Every visitor who comes to Muline by boat should keep in mind that they are sailing into the ancient harbour, and that two millennia ago sailing ships floated there and waited to be loaded with the famous and quality Liburnian oil, which would then end up on gourmet tables throughout the empire of that time.

Tourists can visit a faithful replica of the mill built according to the remains of the ancient mill. Any interested traveller should plan to visit the site to immerse themselves in the intriguing history of this ancient town. 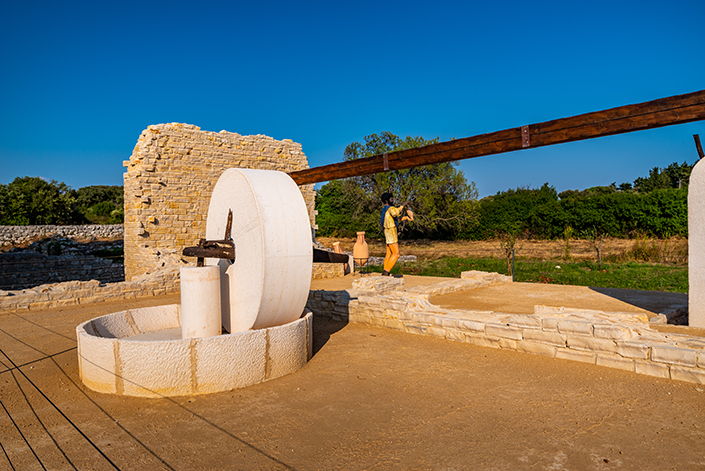 Muline boasts an extremely cute, small studio and gift shop where everything for sale is blue. This shop is, unsurprisingly, called Blutorium.

In front of the Blutorium Studio, in the beginning of August, MLJUF (Muline Summer Unplugged Festival) takes place, at which you can enjoy concerts of both serious and slightly less serious music and performances. Due to space limitations, this festival has a private, cozy and homey atmosphere.

In 2016, as part of the "Every Place Has Its Bench" project started by artist Božica Kliman, the people of Muline were given their unique mosaic bench called "The Sunset Bench". Why the “Sunset Bench”? Because this town has the most beautiful sunset. Come and see it for yourself. The city of Zadar is often said to have the most beautiful sunset in the world, Alfred Hitchcock himself said this when he visited the city in 1954. However, when viewed from Zadar, the sun goes down directly above Muline, so this fact stands as an open invitation to the seafarer to stop at this place and welcome dusk in this quiet bay. 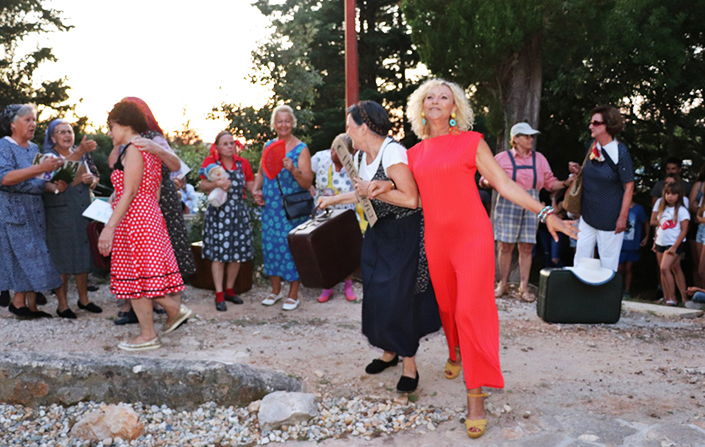 When you are hosted by a fisherman who spends every morning fishing in the Rivanj Channel, you know that you are in a place where you will always find fresh and high-quality fish and seafood. Dido Šime Tavern and its owner Mr. Domagoj will do their best to make your visit to Muline a wonderful memory.

The coastline of the whole island of Ugljan is well indented and rich in numerous bays with gorgeous turquoise seas. In these bays are a multitude of larger and smaller beaches for travellers to visit. The beaches “Zmorašnja luka” and “Južna luka” (South Harbor) in the immediate vicinity of Muline are recommended as they are some of the most beautiful on the island. The beaches are extremely clean, the sea is incredibly clear and there is plenty of natural shade. This is a place where you can relax and enjoy. 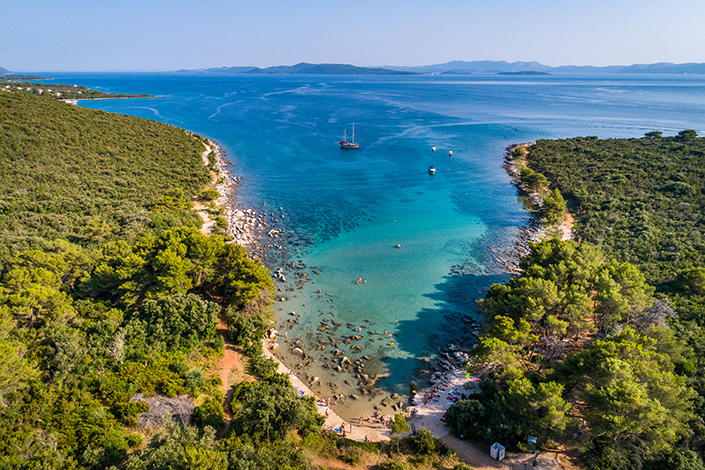 When planning your visit to the Adriatic coast, Ugljan and specifically the hamlet of Muline should not be missed. 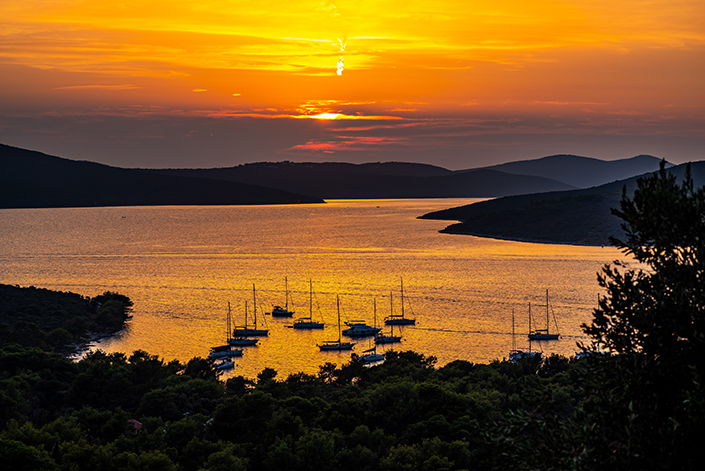